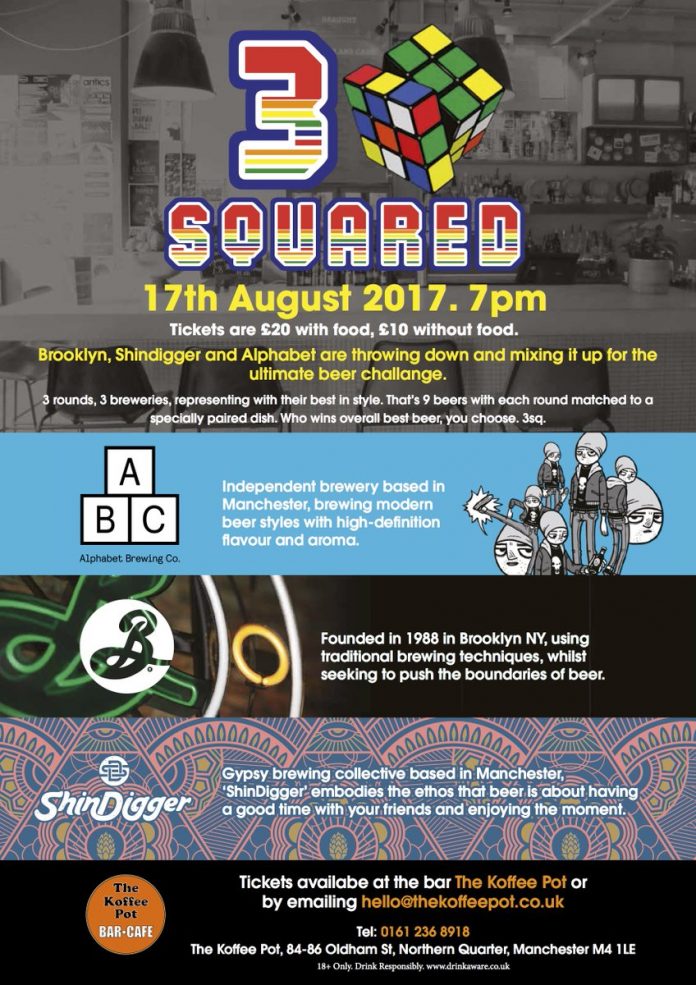 This week, sees one of the foremost craft breweries in the world, Brooklyn Brewery, teaming up with two of Manchester’s most well-known local breweries, Alphabet Brewing Co and ShinDigger, to create the Three Squared challenge.

Taking place at the much-loved Mancunian institution The Koffee Pot from 7pm on Thursday, 17th August, Three Squared will see the three breweries coming together to put their best foot forward for a three-round taste test that will explore the best of what craft beer has to offer in the northwest of England and beyond.

Ticket holders will get the chance to try nine beers from three categories; Lager, IPA and the maverick round, where each brewery will select a beer at random to be paired with a dessert.

The menu will also include the option to try a specially paired dish with each beer, created by the team at The Koffee Pot. The beers and their food pairings will be explained by each brand ambassador from their respective brewery, who will also be on hand to share their insider knowledge on each of the individual beers throughout the night.

The event will end with a vote to decide which brewery will win the prize of their beer being featured on a special menu at The Koffee Pot.

Tickets for Three Squared can be purchased by e-mailing hello@thekoffeepot.co.uk, priced at £20 for nine samples of beer with three paired dishes or £10 without food.

Here is a little about the Breweries taking part

Founded in 2014, Alphabet Brewing Co. can be found in Manchester’s red-light district. With the modus operandi of making kickass beers, the team brew modern styles and re-interpretations of old ones, all using the best ingredients they can get their hands on, and sold as fresh as possible. Branded by local studio Instruct and illustrated by Hammo, the brewery has its roots in creativity.

Founded in 2013 by two students at Manchester University selling their home-brew at house parties, the name ‘ShinDigger’ embodies their ethos that beer is about having a good time with your friends and enjoying the moment.

Where to celebrate PATRÓN Paloma Week in Manchester