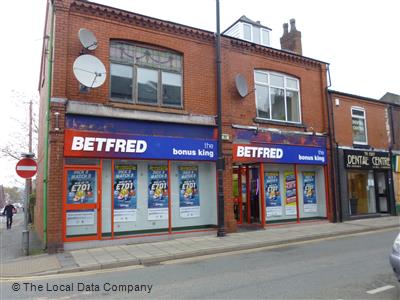 The robbery took place at Betfred on Elliott Street around 11.30am

Staff and customers were threatened by two masked men who were armed with a sawn-off shotgun.

Both offenders are described as about 5ft 10” tall. One of the men was wearing light grey jogging bottoms with green writing on them. The other man was wearing all black clothing.

Both were wearing balaclavas.

Officers believe this incident may be linked to an attempted robbery earlier that day in Farnworth.

Further enquiries revealed that the offenders had also attempted to enter a convenience store at 11am on Highfield Road before fleeing in a white Citroen Nemo.

Police traced the vehicle to an address in Tyldesley and subsequent searches resulted in the recovery of the sawn-off shotgun, a quantity of cash and drugs.

A man in his 30s and a man in his 40s have been arrested on suspicion of assisting an offender and enquires are ongoing.

Detective Sergeant, Craig Hurst of GMP’s Wigan Borough, said: “This was a brazen attack, during daylight hours which has left the witnesses extremely shaken.

“Thankfully no-one was injured, but that doesn’t excuse what the staff and customers had to ordeal at the hands of these violent men.

“I would urge anyone that was in the area at the time that thinks they might have seen something that could help our investigation to please get in touch.”