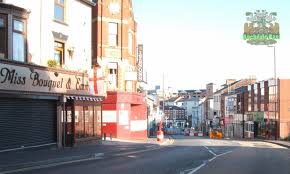 A twenty five year old man is in hospital with serious head injuries after being attacked in Rochdale Town Centre in the early hours of Sunday morning.

The man was punched and kicked to the floor during the unprovoked attack on Drake Street.

The victim was approached by three men and a woman on Drake Street who punched and kicked him to the floor. They continued to kick the victim as he lay on the floor.

The offenders then fled up Drake Street in the direction of Manchester Road.

An investigation has been launched and police are appealing for any witnesses.

Detective Constable Craig Wallace, of GMP’s Rochdale borough, said: “This was a completely unprovoked attack on an innocent man who has been left with serious injuries.

“Our thoughts are with the victim and his family at this time as he remains in hospital receiving treatment.

“We have launched an investigation and I would ask that anybody who thinks they may know something that can assist with our investigation to please contact police.”