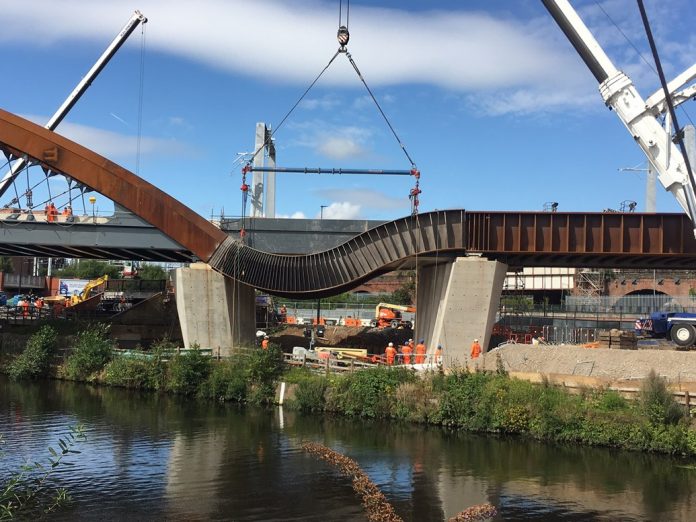 The final eye-catching piece of the Ordsall Chord has been lifted into position by Network Rail.

A steel cascade weighing 40 tonnes, was installed during the early hours of Sunday 6 August, with the second cascade being lifted into position on Monday 14 August, completing the last part of the UK’s first network arch bridge.

Work will now continue on the remainder of the project.  This will involve laying ballast and track on the 1600 tonne bridge as well as further track work, signal work and installing overhead line equipment to allow electric trains to run.

The Ordsall Chord will create new links to Manchester Airport from the North, provide more frequent trains and connect Manchester Piccadilly and Manchester Victoria stations and is due to be completed by the end of the year.

Allan Parker, programme manager for Network Rail, said: “The installation of the cascades completes the final and unique steel ribbon-effect which runs along the outside of the network arch bridge.  We’ve reached yet another major milestone in the project and I would like to thank all the teams who have played an integral role in making this happen.  We are a step closer to providing the infrastructure for more frequent trains and better connections, not only within the city, but the north of England.”

BDP Transport architect director, Peter Jenkins, says of his flowing cascade design for the viaduct bridge: “The overall concept for the bridges is that of a continual, flowing ribbon which incorporates individual structures into a single over-arching identity.

“This latest piece of steelwork connects the River Irwell and Trinity Way bridges with a twisting, sinuous form which smoothly brings the concept of the structure to fruition. The development has been a true team effort from the original sketch through to construction, integrating different people and different tools to achieve the vision.

“The process began with pen and paper concepts which were explored through structural analysis and developed into complex three-dimensional modelling. The bridge’s arches and cascades were then fabricated by Severfield in Bolton using the latest steelwork techniques before being delivered to site.”