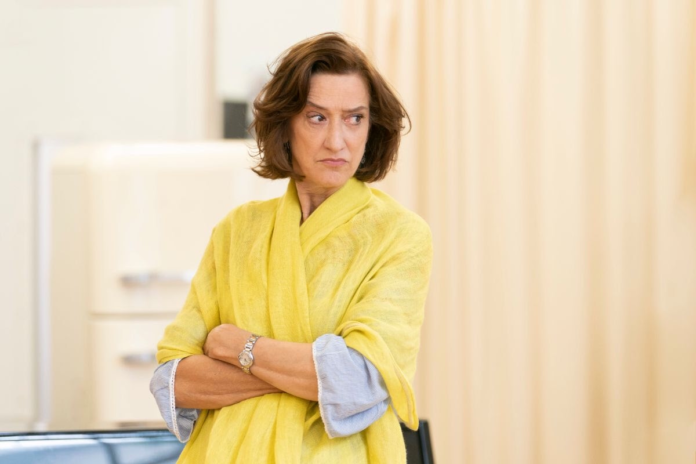 Rehearsal images released for Hedda Tesman as the new stage production begins to take shape ahead of it’s world premiere.

Hedda Tesman will receive its world premiere at Chichester Festival Theatre before playing at The Lowry, Salford from Thu 3 – Sat 19 October.

Leading the cast is Haydn Gwynne in the title role of Hedda. She is joined by Anthony Calf as George Tesman, Jonathan Hyde as Brack, Jacqueline Clarke as Julie Tesman, Natalie Simpson as Thea Tesman, Irfan Shamji as Elijah and Rebecca Oldfield as Bertha.

A Week 53 Commission, in collaboration with Headlong and Chichester Festival Theatre, Hedda Tesman continues the work of The Lowry’s biennial festival that presents work with contemporary new ways of telling stories.

Julia Fawcett OBE, chief executive of The Lowry, said: “Our biennial Week 53 festival brings an array of new and existing international contemporary artists to the North West. In non-festival years it’s extremely important that we commit to the presentation of this work.

“Hedda Tesman is particularly exciting as we are working alongside Headlong Theatre, a company revered for its fearless new writing, re-imagined classics and potent twentieth century plays. Through creative partnerships such as this our Week 53 commissions will continue to ensure theatre remains engaging and relevant and enables new contemporary voices to grow their presence in the region.”

Hedda Tesman is a co-production between Headlong, Chichester Festival Theatre and The Lowry (Week 53).

Yoko Ono and Gillian Wearing among first artists announced for summer exhibition at The...

The Only ‘Bubble House’ we Want to be in!