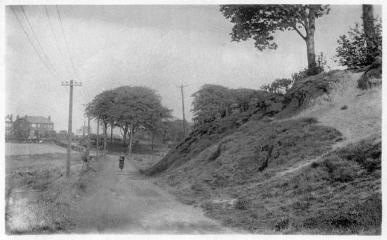 Between the M6 and M62 near Newton-Le-Willows, a wooded valley branches off east-wards from the Wigan-Warrington road.

The northern side of the valley, known locally as Red Bank and was marked by a high man-made bank with a hedge running along it. On the opposite side of the valley, which is about 100 yards wide, stands a natural steep-sided sandstone bank, which in-places is between twenty and thirty feet high.

In 1648 this was the site of the English Civil War “Battle of Winwick Pass”.Having secured Preston, Cromwell advanced south with his main force in pursuit of the disordered Scots, having left a strong force at Preston to guard the prisoners and to garrison the town against a possible attack.Cromwell had only 3,000 foot and 2,500 horse and dragoons against 10,000 Scots. However, Hamilton’s troops were exhausted and demoralised.

You can find out what happened next in the summer of 1648 at the January meeting of the Manchester Military History Society on Tuesday 14th January at 7.30pm at the East Manchester History and Gaming Centre, Knivton Street, Godley, Hyde, SK14 2PU.