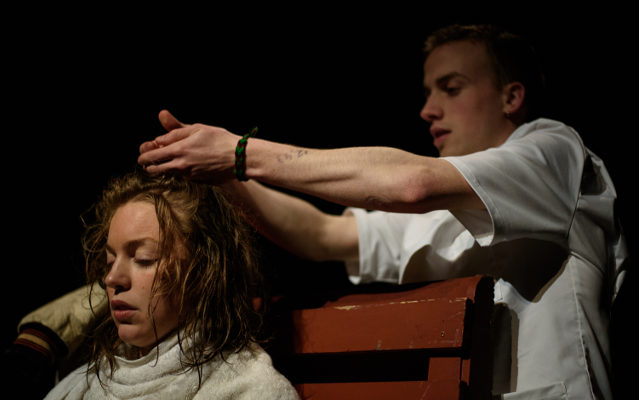 FellSwoop Theatre will premiere Ghost Opera ‘Developed With’ The Studio at The Lowry Thu 15 & Fri 16 Oct with music from the acclaimed French string quartet Quatuor Van Kuijk.
Ghost Opera has been devised through the ‘Developed With’ programme at The Lowry, Salford, and is supported by the Artist Development Fund at Tobacco Factory Theatres.

Ghost Opera is a mesmeric two-hander exploring the haunted, devised by the award-winning Bristol-based company FellSwoop Theatre. Spoken and sung, with music provided by acclaimed string quartet Quatuor Van Kuijk, the piece is an experimental combination of theatre and opera. Their previous productions of Ablutions (winner of the Ignite Festival Critics’ Choice Award), Belleville Rendez-vous (winner of the NSDF Emerging Artists Award) and Current Location have intrigued and delighted audiences across the country.

Two strangers, both haunted by living ghosts in their everyday: one, her dying mother, and the other, his celebrity idol. Escaping to seek refuge at a spa retreat, the thirty year-old woman and seventeen year-old boy meet and together try to resist becoming that which haunts them.

Although using music and sung text throughout, the production is far from being an ‘opera’ in the traditional sense. It takes its name from an ancient practise: the ‘Ghost Operas’ in which humans and spirits of past and present could communicate with each other. This inspired the company to create this tale about the haunted using a form of their own invention.

This tour follows work-in-progress performances at the International Festival d’Art Lyrique d’Aix-en-Provence (France) and Madrid Frinje (Spain). The tour will kick off in September 2015 with a two-week preview run at Tobacco Factory Theatres in Bristol before opening at The Lowry, followed by a further UK tour at the Bikeshed Theatre, New Diorama Theatre and Warwick Arts Centre.

We slowly move towards the Smart Motorway