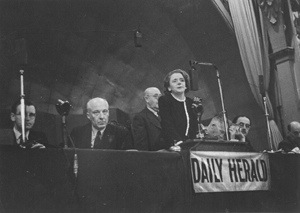 In her day, Ellen Wilkinson was the most famous, and certainly the most outspoken British female politician.

Born and bred in Manchester, she was a feminist and a socialist who, among many other achievements, helped women over the age of 21 gain the vote, led the iconic Jarrow Crusade and in 1945 became the first female Minister of Education.

She was only 4 foot 10 inches tall, but she punched way above her height, hence some of her nicknames: the ‘mighty atom’ and the ‘fiery particle’.

In 1924, when Ellen first took her seat in parliament, she was the only woman on the Labour benches and one of only four women in the House of Commons.

Now Dr Paula Bartley will be examining what it was like to be in such a minority in parliament and finding out more about Ellen’s achievements at the People’s History Museum this weekend.

Dr Paula Bartley has been promoting women’s history in schools, colleges and universities for most of her adult life. She was Senior Lecturer in History at the University of Wolverhampton before going to live in Hungary for seven years.

Her biography, Ellen Wilkinson: From Red Suffragist to Government Minister was published by Pluto Press in February 2014.

Cost is free but In order to keep our events programme affordable to everyone, please make a donation

Mikron Theatre are Revolting in Manchester