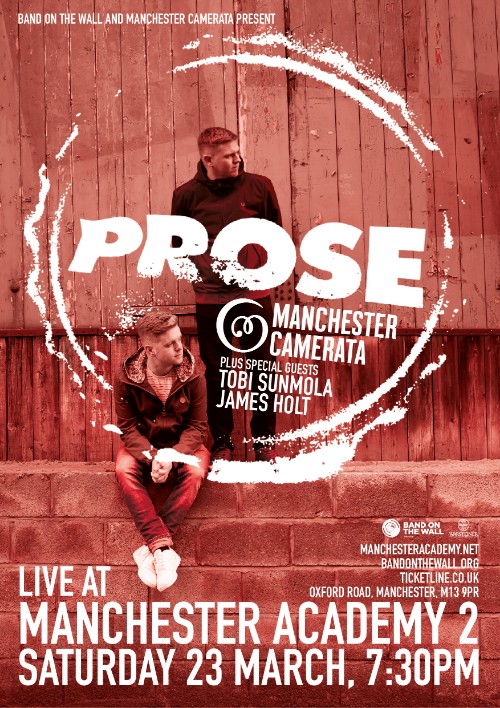 “This is so exciting. We are going to be playing our songs live with nine members of Manchester Camerata. I can’t wait. It’s a new audience for us and a new sound for our fans. We hope it shows what can be achieved through musicians that may not ordinarily work together collaborating. We’ve just announced our special guests, Tobi Sunmola and James Holt. Both are exciting new artists and from different genres too. There should be something for everyone at the gig. ”

Mike – who formed Prose with Lee Royle (guitar, vocals) – wrote the lead track ‘See Me Like This’ about his late father after he’d lost his battle with alcohol and drug addiction, as Mike revealed:

“I wrote this song as my dad was dying in the hospital, due to alcohol and drug abuse. I felt conflicted with my feelings because he hadn’t been there for me and I missed out on things that a normal kid should have had with their dad. But it’s also about how much I still loved him and the pain I was feeling at the thought of him dying.”

“The raw emotion, honesty and vulnerability of what Prose does, makes performances with them unforgettable. I see them as poets of their day, as much as musicians. Collaborating and experimenting with them before they appeared at Band on the Wall was a whirlwind of gritty and heartfelt words, with sound world which often had that anthemic quality – I can’t wait to hear what comes next on the 23rd March!”

One of Mike and Lee’s previous collaborations was with four-time BRIT Award winner Emeli Sandé who joined Prose for their track ‘Head Sick’ after being introduced by London DJ and producer Naughty Boy – a long-term collaborator who signed Prose to his label after discovering them on YouTube.