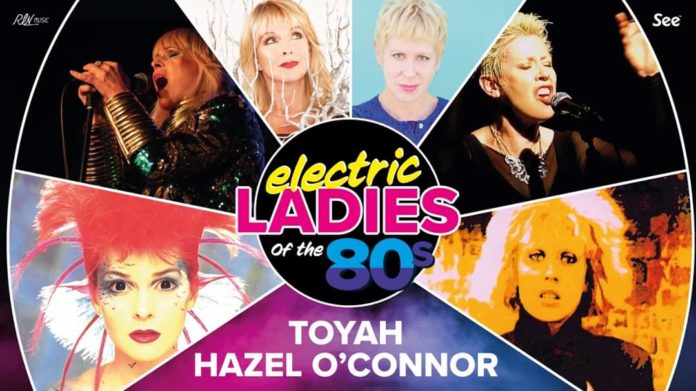 Iconic singing superstars Toyah Willcox and Hazel O’Connor will ramp up the retro when their pulsating new nationwide tour Electric Ladies of the 80s hits Manchester next month.

The musical legends, who were at the forefront of post-punk and new wave, will evoke the era of neon brights and vintage beats as they each perform their own hit-packed set – and team up for some duets and surprises.

Between them, Toyah and Hazel have a combined back catalogue of 60 albums, plus several TV and film roles. Promising an uplifting show full of synth-spiked classics and more modern numbers, the 14-date tour will arrive in Manchester on April 27th.

The pair will be joined on stage at the Royal Northern College of Music by a full electric band, with the set featuring much-loved tracks like Thunder In The Mountains, Eighth Day, It’s A Mystery, Will You, I Want To Be Free and D-Days.

Speaking of the tour, Toyah says: “I’m wildly excited for this. We’ll be doing some of our own repertoires, original arrangements, and new material. Expect it to be a very upbeat show, very musical and nostalgic, and above all, great to watch.”

Despite first meeting in 1980 at an audition, Toyah and Hazel’s careers have never collided – until now. Delighted to be hitting the road together at last, Hazel says: “It’s taken us 40 years, but we finally have this opportunity. I always love watching Toyah perform; her music is part of the roadmap of my life. The show is sounding incredible in rehearsals, and we can’t wait to get going.”

As one of pop‘s most recognisable faces, Toyah has had 10 chart-topping singles and eight hit albums, including the Gold-selling Anthem and her most recent success, In the Court of the Crimson Queen. She has also starred in numerous acting roles, including the film Quadrophenia. Meanwhile, Hazel continues to produce new music – including her latest acclaimed album, Hallelujah Moments.

Tickets are available now from SeeTickets https://www.seetickets.com/tour/toyah-hazel-o-connor-electric-ladies-of-the-80s and individual venues.

Deliveroo Launches Free ‘Body Parts’ Pies and they Sound like a Scream!