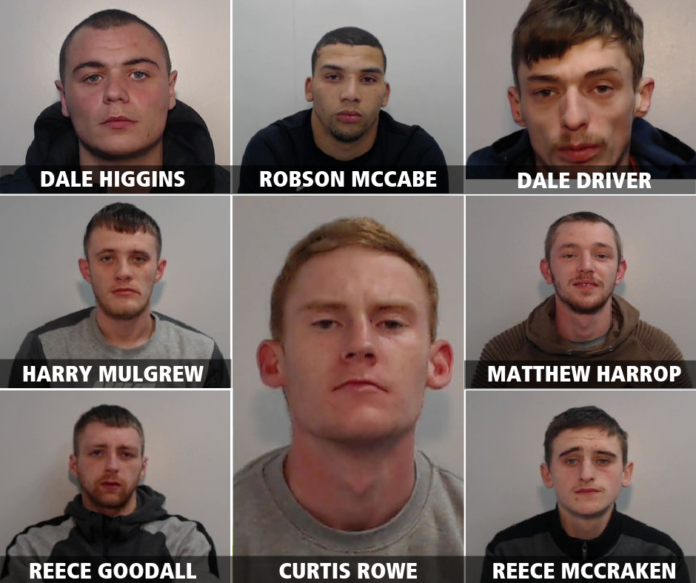 Eight men have been jailed after committing 39 burglaries in just under a year across Cheshire and Stockport.

The men were part of two groups that committed a series of burglaries in Prestbury, Wilmslow and Stockport in Greater Manchester.

Between September and November 2018 one group – which included Higgins, Goodall, Mulgrew, Harrop, Driver and McCracken, committed 13 burglaries and stole 15 vehicles at a value of £347,000.

The other group – which included Rowe, McCabe and Higgins – committed 11 burglaries in Prestbury and Wilmslow as well as 11 in Stockport. The four men stole over 12 cars and replaced the registrations plates using specialist equipment, which was later seized by officers during their arrests.

Higgins – who was part of both criminal gangs – committed a spree of burglaries across Cheshire and Greater Manchester.

At one address in Wilmslow which was broken into, the men left a handwritten note which read: “thanks for the free stuff, yours sincerely the “midnight removals.” This was after stealing numerous items of high value jewellery, including a men’s Omega watch, several items of ladies jewellery and a brown Hugo Boss bag.

The men broke into the homes of their victims by either snapping the locks of doors or smashing window panes. At one address they used an extendable washing line pole to fish for the keys of a Mitsubishi Outlander from the kitchen before stealing the vehicle.

Police were able to identify the burglars using CCTV footage and tracing phone calls and text message conversations, which showed how the men targeted properties and carried out the burglaries.

Detective Constable Rob Shakespeare of the Stockport division said: “The investigation encompassed 39 burglary offences by two organised criminal teams working on a massive and industrial scale. They targeted high value vehicles for sale to third parties giving no thought to the impact they had on families whose house they entered and property they stole.

“Although they thought they had planned their burglaries well, in reality they left evidence behind and a trail of clues for police officers to follow.

“Thanks to a joint investigation with Cheshire police who we could not have secured today’s sentences without, another group of criminals are behind bars.”