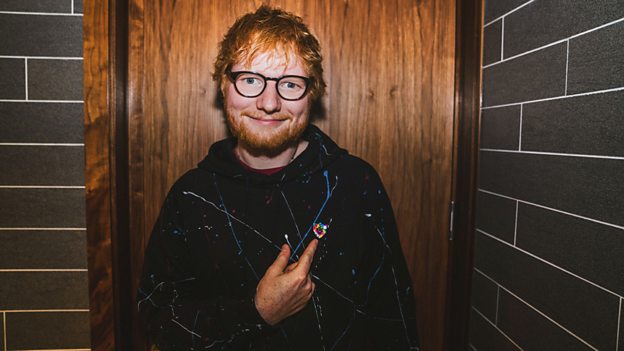 Ed, who received a Gold badge last year – the show’s highest accolade – has watched Blue Peter since he was a kid so didn’t hesitate when he was asked to design the new music badge.

Ed Sheeran says: “I’ve always loved Blue Peter and even got the chance to present the show a while back, so I’m made up that I got to design their first ever badge for BBC Music Day. Music was really important to me growing up and I hope this badge will inspire more kids to get into it.”

Ed sketched the new badge, which has a multi-coloured background and features the Blue Peter ship alongside piano keys, a microphone and music notes.

To earn the badge, Blue Peter’s young fans need to tell Blue Peter how they enjoy making music – maybe they have tried a new musical instrument, or been part of a musical performance, or could tell Blue Peter about an instrument that they love to play. They also have to become a musical detective by asking a parent, grandparent, or teacher about their musical memories to find out how music has inspired them; and tell Blue Peter their top three favourite songs of all time and why they love them.

The badge will be launched live on Thursday on CBBC at 5.30pm in a special BBC Music Day show that also features legendary musician and Blue Peter gold badge holder, Sir Paul McCartney. He will be talking about his musical memories including how his songwriting skills have improved over the years from the first songs which were, he says, ‘nice, but very basic’.

Also on the show, Guest Editor, Radio 1’s Maya Jama, shares her sounds of the summer with an online vote where the audience can select their favourite; Becky Hill performs I Could Get Used to This; and multi-instrumentalist Jacob Collier re-mixes the Blue Peter theme tune with the voices of Blue Peter viewers before performing live in the studio. Presenter, Lindsey Russell, will be taking on a huge challenge – conducting the BBC’s Philharmonic Orchestra – and will also be at Leeds Festival talking to artists about the music badge.