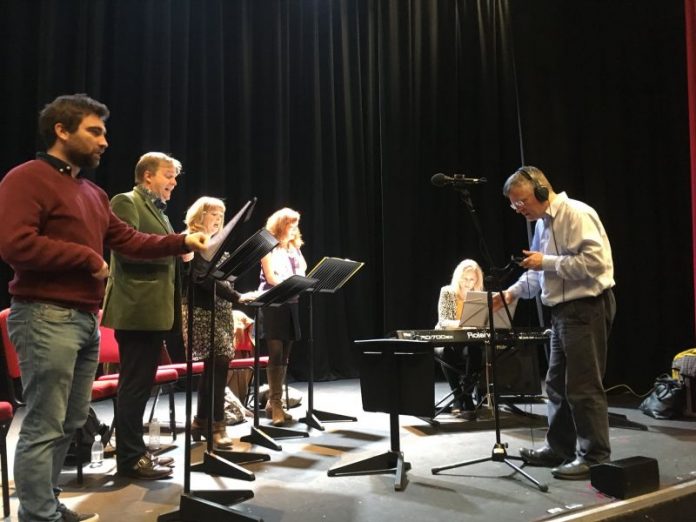 THE FIRST ever Yorkshire opera is receiving its world premiere at the University of Salford.

The Arsonists, sung entirely in the dialect of God’s own county, has been written by the University’s Professor of Music Alan Williams, with libretto – or lyrics to the uninitiated – by ‘Bard of Barnsley’, the poet Ian McMillan.

The opera, being performed in the University’s New Adelphi Theatre this week, tells the tale of disgruntled residents of a South Yorkshire former mining town in which a distribution warehouse – now the town’s only employer – is burnt to the ground.

Professor Alan Williams explained his collaboration with the Yorkshire poet was aimed at trying to make a genre that is often associated with the upper crust of society become more relevant to a wider group of people.

He said: “If opera can’t represent all sections of society – not just the Dukes and Duchesses – and if it can’t talk about contemporary themes then it’s in danger of making itself irrelevant.

“This is an attempt to write a contemporary English opera that can say something about Britain today and that’s accessible to a much larger group of people. We’ve tried to include an element of realism that you don’t normally find in opera, and there’s a lot of northern humour based on the way people talk to each other.”

The opera will be sung by the south Manchester based Heritage Opera, with music performed by members of the BBC Philharmonic.

But he said there were pitfalls in writing an opera entirely in the Yorkshire accent, as the dialect’s famously lengthy vowels went against the singers’ classical training.

He worked with the University’s linguist Phillip Tipton, an expert in accents who has provided dialect training to screen and stage actors, and who was able to write Ian McMillan’s script as a phonetic guide for the singers to follow.

Poet Ian McMillan said: “It’s been an absolute joy to experience my words being brought to life by Alan Williams’s amazing music and this project has reinforced my idea that new writing and music can be at the heart of what a university does in the local and wider community. Here’s to the next collaboration!”

Professor Alan Williams from the University of Salford said: “One of the reasons people see opera as being very elitist is because the performers are trained to sing using received pronunciation. They have to sing in a way that sounds very mannered – despite the fact that a lot of opera singers are in fact from the north – and if you try to deviate from that it goes against a lot of the training.

“We collaborated to write out sections in the phonetic alphabet, so what we ended up with almost looked like a Yorkshire phrase book.”

The Arsonists will be performed at the University’s New Adelphi Theatre on Saturday November 18 as part of New Music North West – the UK’s largest festival of new British music, presented by the Royal Northern College of Music, showcasing the work of more than 50 living composer

Performance looks at how dance can help depression sufferers