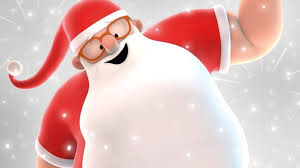 The festive film has racked up more than a million views since going live only four days ago.

The animation shows Manchester’s Santa struggling on the ice until kind hearted children take him by the hand and show him the ropes – only for other skaters (including a particularly Manc reindeer) to have etched out a huge Manchester bee in the rink as the camera pulls out.

The video has breached a million views in a matter of days, rivalling the annual festive films of the high street retail giants such as John Lewis and Marks and Spencers.

Intended to promote the Christmas season in Manchester and encourage families to visit and enjoy the city, the video has also tugged the heart strings of viewers following a turbulent year in the city following the Manchester Arena attack.

Cllr Pat Karney, Manchester’s Christmas spokesperson, said: “Our Christmas video has broken all records and just shows how many people it has touched at an important time for the city.

“The festive season boosts the city’s economy by around £90m and is vitally important for retailers of all sizes – independent and high street alike.

“The animation touches the soul following turbulent times in the city this year, and it has really hit the mark with the millions of people who have watched and loved it.”

Andrew Lord, Managing Director and Co-founder Flipbook Studio, said: “It was great working in partnership with Manchester City Council again for another year of festive, creative brainstorming. We were asked to devise a creative treatment and animation that was humorous, heart-warming, poignant and that incorporated the worker bee emblem of Manchester, which has this year come to symbolise so much more to many Mancunians.

“Christmas is a time for unity and coming together and we wanted the animation to simply reflect that and Manchester’s indomitable and compassionate spirit. We’re very proud of our home city and delighted that the animation has been so well received.”

Holland’s Pies, has created a Limited Edition Christmas Dinner Pie and you can win...

3 Ways to Score a Christmas Number 1