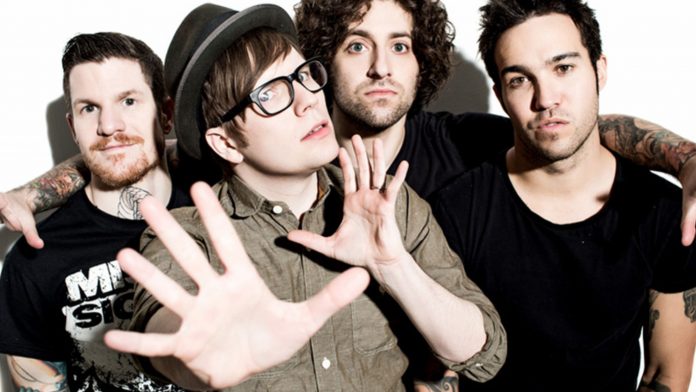 Earlier this month, Fall Out Boy teased their fans with the #isMANIAdoneyet trending globally, before they finally confirmed a “YES” and announced the full tracklisting, see below. This week, Fall Out Boy surprise their loyal fans with a brand-new single, “HOLD ME TIGHT OR DON’T” and the news that they are returning to Europe for an arena tour, kicking off on 27th March 2018 in Birmingham and wrapping up in Brussels on 12th April.

“HOLD ME TIGHT OR DON’T” is the fourth song to drop from Fall Out Boy’s eagerly anticipated seventh studio album M A  N   I    A which is released on January 19th 2018. “HOLD ME TIGHT OR DON’T” receives its radio premiere this afternoon on Scott Mills Radio 1 show, and Pete Wentz will call into the show from California where they are in the midst of their M A  N   I    A North American tour.

The video, directed by Brendan Walter and Mel Soria, also premieres today and can be viewed now on YouTube and Vevo.

It’s a love story embedded in a colourful and vibrant celebration of Dia de los Muertos. “HOLD ME TIGHT OR DON’T” is the fourth glimpse inside M A  N   I    A, coming on the heels of global streaming hit The Last Of The Real Ones which dropped in September. The album can be pre-ordered now from https://falloutboy.lnk.to/mania. Fall Out Boy have also announced the tracklisting for the album:

Eat Out to Help Out continues at Mamucium and The Refuge