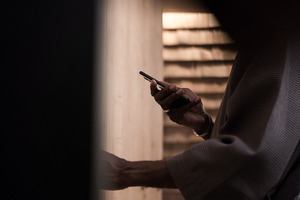 ‘Cyberflashing’ will become a new criminal offence with perpetrators facing up to two years behind bars under new laws to be introduced by the Government.

The practice typically involves offenders sending an unsolicited sexual image to people via social media or dating apps, but can also be over data sharing services such as Bluetooth and Airdrop. In some instances, a preview of the photo can appear on a person’s device – meaning that even if the transfer is rejected victims are forced into seeing the image.

Research by Professor Jessica Ringrose from 2020 found that 76 percent of girls aged 12-18 had been sent unsolicited nude images of boys or men.

Ministers have today confirmed that laws banning this behaviour will be included in the Government’s landmark Online Safety Bill alongside wide-ranging reforms to keep people safe on the internet.

The new offence will ensure cyberflashing is captured clearly by the criminal law – giving the police and Crown Prosecution Service greater ability to bring more perpetrators to justice. It follows similar recent action to criminalise upskirting and breastfeeding voyeurism with the Government determined to protect people, particularly women and girls, from these emerging crimes.

Protecting women and girls is my top priority which is why we’re keeping sexual and violent offenders behind bars for longer, giving domestic abuse victims more time to report assaults and boosting funding for support services to £185m per year.

Making cyberflashing a specific crime is the latest step – sending a clear message to perpetrators that they will face jail time.

The change means that anyone who sends a photo or film of a person’s genitals, for the purpose of their own sexual gratification or to cause the victim humiliation, alarm or distress may face up to two years in prison.

It follows a Law Commission review ‘Modernising Communications Offences’ which recommended that a new offence should be created.