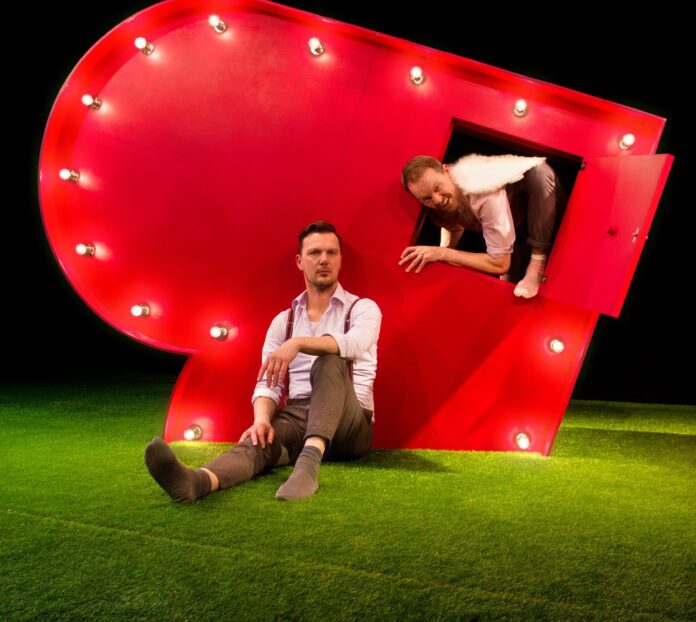 After several years of winning acclaim in the comedy world for their humour-infused shows, New Art Club’s Tom Roden and Pete Shenton are reaffirming their commitment to dance and physical theatre in their new work Cupid’s Revenge.

Created before lockdown and now ready to tour as we begin to return to theatres, Cupid’s Revenge is a 60-minute physical poem that plants Love ♥ under the microscope of the 21st century. Performed on a set designed by Will Holt, centred around a 2-metre love heart that has crashed to earth, Cupid’s Revenge uses rhythmic repetition and spoken text to spotlight love’s idiosyncrasies and commonalities.

As New Art Club, Pete and Tom started making shows together in Manchester in 1998 and have been presenting ground-breaking performances together nationally and internationally ever since, drawing a broad spectrum of audiences for their genre-defying shows. Cupid’s Revenge signifies a fresh direction for the pair as they refocus on their roots and training in choreography.

Sometimes funny, sometimes heart-breaking, Cupid’s Revenge counterbalances seriousness with absurdity. Gareth Williams’ original score provides an anchor for the movement, which when combined invites audiences to be swept up into the beat and pace of the work. In their own words “Cupid’s Revenge is a joyful dancing outburst against the forces that masquerade as love. A look at love in the context of now, both big and small, where it really is and what it really means”.

Cupid’s Revenge is partially inspired by the myth of Cupid and Psyche – a tale in which Psyche is a princess so beautiful that the goddess Venus becomes jealous. In revenge, she instructs her son Cupid to make her fall in love with a hideous monster; but instead, he falls in love with her himself.

In true New Art Club style, the performance sees dance, physical theatre, and comedy combine to capture the audience’s imaginations, moving effortlessly from silliness through to punching us in the gut with heartfelt, sometimes painful truths. Cupid’s Revenge touches on big ideas from evolution right through to Kerplunk and makes the fleeting act of holding hands the most perfect gesture of love.

Cupid’s Love is playing The Lowry in Manchester on the 12th of November.