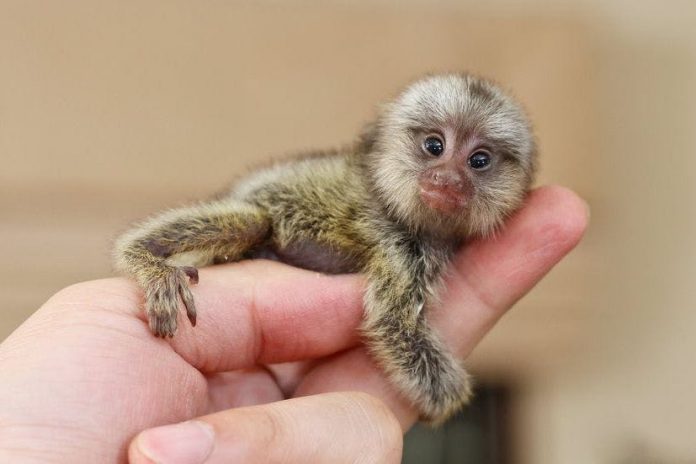 A  team led by the University of Salford have  discovered that the Pygmy Marmoset, the world’s smallest monkey,is not one species but two.

Weighing just 100 grams – roughly the size of a large tomato – the insect-eating primate was first described scientifically in 1823 by German naturalist Johann Spix as Cebuella pygmaea, with a sub-species subsequently found.

Using the latest techniques in genomics and phylogenetics, have established proof of two clades or branches of pygmy marmosets, that have diverged from one another around 2 – 3 million years ago.

The study was restricted to monkeys in the Brazilian Amazon, but there are indications that researchers may discover more species with further research in the forests of the other countries where they live.

Findings like this have serious implications for conservation, since population numbers essentially are halved when a species is suddenly split in two in the light of new scientific evidence.  Luckily for the pygmy marmosets, the forests where they are found are amongst the best preserved patches of Amazon, the scientists say.

The study, led by Jean Boubli, professor of tropical ecology and conservation, at Salford University, UK, and the first ever to use genomics to investigate the evolutionary history of a group of New World primates, is published in Molecular Phylogenics and Evolution.

The team, which included scientists from four Brazilian research institutes and US-based Conservation international, found one of the distinct Pygmy Marmoset species is found in Brazil’s Japurá basin, extending west into Colombia, northern Peru and Ecuador, while the other, is found south of the Amazon River, east to the Madeira River in Brazil, and possibly extending into Peru and Bolivia.

They employed genome sequencing (ddRADseq) to study the evolutionary history of Cebuella and found two lineages.

Professor Boubli said: “There has long been confusion over the taxonomy of these wonderful creatures mostly because Spix did not record in his travel diaries the exact location where he collected the type of Cebuella pygmaea in the early 1800s.  That creates confusion as to which of  the two recently uncovered species should keep the original name; that of the north or of the south of the Amazon.

“The beauty of genomics means that we can now see the pygmy marmoset is a term for two species which have been evolving independently for nearly 3 million years.”

According to the IUCN Red List of Threatened Species, Pygmy Marmosets are species of “Least Concern.” But recent disease epidemics resulting have prompted the IUCN Species Survival Commission’s Primate Specialist Group to recommend updating that status to Vulnerable.

The team is now collecting more data including faeces from different localities to clarify the taxonomy of Pygmy Marmosets and the geographic ranges of the two species already identified—and possibly even that of new ones.