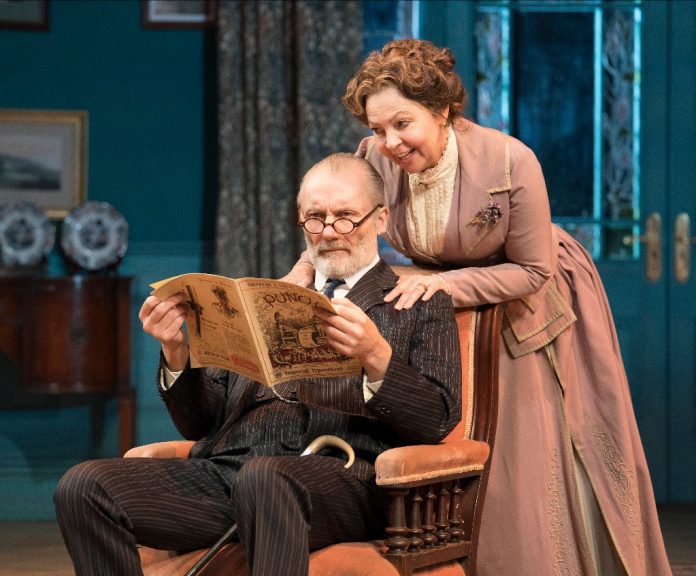 Timothy Watson, best known for his role as the villainous Rob Titchener in BBC Radio 4’s long-running dramatic favourite The Archers, leads the cast of The Winslow Boy running at The Lowry from Mon 9 – Sat 14 April.

Timothy is joined by Tessa Peake-Jones as Grace Winslow and Aden Gillett as Arthur Winslow.

Misha Butler makes his stage debut in this production as Ronnie Winslow. Dorothea Myer-Bennett appears as Ronnie’s spirited sister, Catherine and Theo Bamber his brother, Dickie. The cast is completed by Soo Drouet as the Winslow’s Maid, Violet and Sarah Lambie who appears as reporter Miss Barnes.

The play is directed by Olivier Award-nominated Rachel Kavanaugh whose recent credits include A Christmas Carol, Oklahoma! and Half a Sixpence.

Timothy Watson captured the collective hatred of the nation as Rob Titchener in The Archers who, in Radio 4’s controversial slow-burning storyline, revealed himself to be not the charming and capable man he purported to be on his arrival in Ambridge but a manipulative bully who coercively controlled his partner, Helen.

The storyline not only permeated the UK’s cultural fabric, but came during a period in which new UK Legislation was introduced protecting people from Controlling or Coercive Behaviour in an Intimate or Family Relationship. The charity Women’s Aid noted during the final year of the two and a half year plot that a 20% increase in calls to the National Domestic Abuse Helpline was observed which was noted, in part, to be a reflection of the ‘Archers’ effect.’

On stage Timothy has appeared regularly in London and the West End, toured the length and breadth of the country countless times, and acted in over fifty productions in repertory and other theatres. He has made numerous appearances on TV and film, including series regular Mr Perez, Maitre d’ of the Palm Court Restaurant in Mr Selfridge.

Timothy has always been particularly fond of radio drama. He first appeared in The Daughters of Venice, in the early 1990s. Since then he has been heard in many an afternoon play or classic serial. A particular favourite was playing Damon Wildeve in The Return of The Native for Rosemary Watts. Timothy is also a busy voice-over artist. He has narrated nearly a hundred documentaries, has lent his voice to a wide range of advertising and has recorded multiple voices in over thirty video games. He voiced both James Bond and Auric Goldfinger for the Bond ‘Legends’ game, released in 2012.

Having been expelled from the Royal Navy College for stealing a five-shilling postal order, young cadet Ronnie Winslow’s entire family are pulled apart by the repercussions of this charge. Set against the values of 1910 Edwardian London, the Winslow family fight to clear his name or face social ostracism as the case becomes a national scandal. Based on a real-life event, The Winslow Boy is a courageous and often delicately humorous window into the class and political hypocrisy of the time. This highly-charged moral drama will have audiences gripped by the heart-tugging decisions faced by each of The Winslow Family. Where will their sacrifices leave them and what is really at stake?

The 1946 play became one of Rattigan’s best known and most loved works. The Winslow Boy has enjoyed several high-profile revivals, both in the West End and on Broadway. It was turned into a feature film in 1948, directed by Anthony Asquith, and again in 1999 by David Mamet. The play won the Ellen Terry Award for Best New Play and, on its US premiere at the Empire Theatre in October 1947, received the New York Critics’ Circle Award for Best Foreign Play.

This week at the Met in Bury