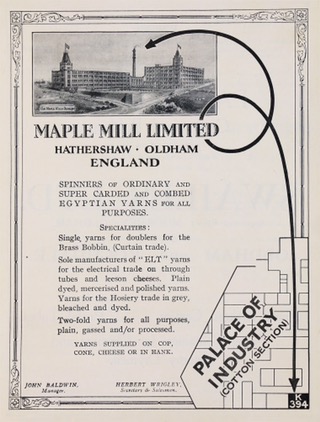 As demolition begins following the fire at Maple Mill this week, we take a look at its history.

Designed as a designed as a double mill by the architect Sydney Stott, Maple Mill opened in two stages. The first mill was built in 1904 and the second mill in 1915.

It specialised in Egyptian super-carded and combed yarns, so specialty yarns which included  yarns for the brass bobbin and curtain net trades, double spun yarns for curtains and lace, and yarns for the electrical trade.

Taken over by the Fine Spinners and Doublers in the 1950s, it ended its life as part of the Courtald’s empire and in the 1960’s would be briefly part of a cross iron curtain experiment in trade, taking delivery of experimental Open End Spinning machines from Czechoslovakia. A team of technicians from that country were based for a while in Oldham.

The machines were designed to spin Uzbek cotton not the American cotton or synthetics used in Oldham.

Courtalds closed the mill in 1991 and so began its chequered post industrial history.

The mill was sold to Vance Miller and was used to manufacture and market fitted kitchens and furniture.

The Rochdale based businessmen was not without controversy, dubbed in the press as the “kitchen gangster” for passing off his kitchens as luxury items when in fact they were, as described by a judge as “effectively rubbish.”

The mill was the base for a string of Kitchen Conpanies and first attracted the interest of Trading Standards in 2006  resulting in the arrest of four people, including Miller, were arrested on suspicion of conspiracy to defraud in what was one of Tradings Standards’ biggest ever operations .

Trading continued but in 2009 a fire broke out in the mill, caused by one of the diesel generators in the business.At the time it was one of the biggest incidents attended by Greater Manchester’s fire fighters.

The fire this week is in fact the third major one at the premises, the most recent in September of this year.

“residents labelling the building dangerous eyesore and magnet for vandals that needed to be demolished.” reported the Oldham Chronicle.

As for Vance, the courts finally caught up with his Company in June of this year when six people were jailed for selling “rubbish” kitchens on behalf of Mr Miller.

Miller himself though escaped the country, thought to be in the Far East.