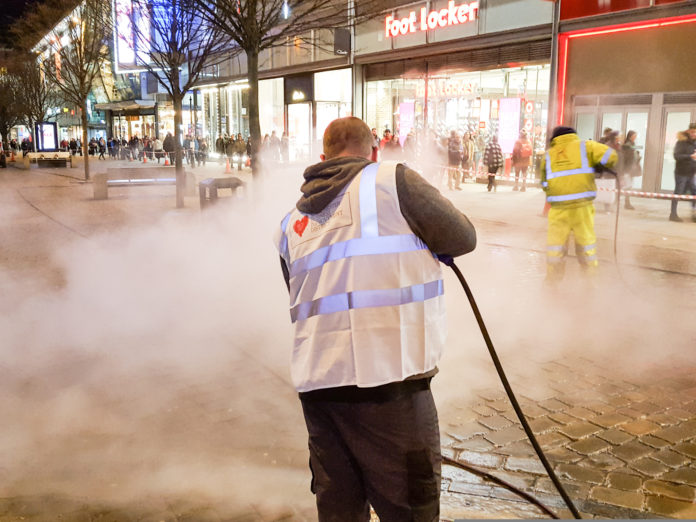 The cleaning schedule started earlier this month on Market Street and St Ann’s Square with Ramora moving through the BID area throughout the course of January.

One of the key focuses is tackling the chewing gum that stains a majority of city centre pavements. There are on average 40 pieces of chewing gum per square metre, with Ramora already removing an incredible 275,680 pieces in the 6,892 metres squared they’ve cleaned so far.

Manchester BID is run by CityCo, the city centre management company for Manchester and Salford. The BID brings together 400 retail, food and other customer-facing businesses in the central shopping area. It began its new five-year term at the end of last year, following a successful renewal ballot in November last year which saw 77% of voters back the continuation of the BID until at least 2023. The ‘Yes’ vote secured an additional £6 million of investment into the city’s retail district over the next five years, helping Manchester retain and reinforce its standing as the UK’s leading retail destination outside of London.

Jane Sharrocks, Manchester BID Chair said: “Clean streets have a vital role to play in a visitor’s experience to Manchester and we’ve already seen an incredible difference on Market Street and St Ann’s Square. This extra cleansing ensures we are delivering on the BID’s focus to help make the city centre the most vibrant and attractive place it can be.

“We all have a role to play to keep Manchester clean and help protect the local environment and once we have clean streets, it’s our duty to do everything we can to keep them that way. Let’s Keep Manchester Tidy.”

Big book donation gives the gift of reading this Christmas