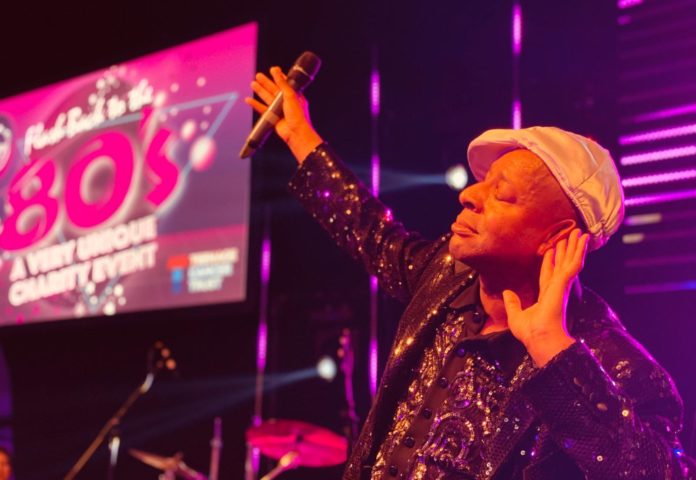 Manchester Airport’s Runway Visitor Centre was the venue for an 80’s themed gala ball attended by over 400 guests who danced the night away to pop legends Imagination raising over £75,000 for Teenage Cancer Trust North West.

The highlight of the evening was the Battle of the Bands competition where 3 local schools competed to win the accolade of best band.  Leee John from Imagination who continues performing as part of his iconic multi-million album selling band, Mike Percy former member of Dead or Alive who went on to write for other much loved bands such as S Club 7, Blue and Flo-Rida and Jamie Griffiths, Brand Manager for Smooth Radio were the expert judges for the evening.

The competition which featured 80’s music was won by Cheadle Hulme School band named “The Schrutes” with their fantastic cover of Purple Rain by Prince.

Over £10,000 was raised between the three schools for Teenage Cancer Trust and a special “Thumbs Up” trophy for best fundraising school was presented to Fallibroome Academy from Macclesfield by Jane Sutton mother of champion fundraiser Stephen Sutton who’s magnificent thumbs up campaign raised over £5M for the charity before his death in 2014 at the age of 19.

The event also featured young musicians supported by Teenage Cancer Trust who performed the 80’s hit “Together in Electric Dreams” who were given a standing ovation by the audience.

The most poignant part of the evening was the tribute to Max Morrison who succumbed to leukemia earlier this year at the age of17.  Talented musician Max was on the cusp of a successful music career when his illness returned.  Max battled on even releasing his new album in the weeks before his death.

The ball also featured some amazing “money can’t buy” auction prizes including an afternoon fishing with Who singer Roger Daltrey at his estate in Sussex and golf with Ryan Giggs. A unique and original painting by Manchester Bee artist Justin Eagleton, which is the first of a limited collection of 10 was sold for £5,000.

Teenage Cancer Trust is the only UK charity dedicated to improving the quality of life and chances of survival for the seven young people aged 13 to 24 diagnosed with cancer every day. The charity funds and builds specialist units in NHS hospitals and provides dedicated staff, bringing young people together so they can be treated by teenage cancer experts in the best place for them.

Traditionally treated alongside children or elderly patients at the end of their lives, young people can feel extremely isolated, some never meeting another young person with cancer. Being treated alongside others their own age can make a huge difference to their whole experience. Teenage Cancer Trust wants every young person with cancer to have access to this specialist support, no matter where they live.

Vanessa Simmons, Head of Regional Fundraising (West and Wales) at Teenage Cancer Trust, said: “We’re so grateful to everyone who made Flash Back to the 80’s for Teenage Cancer Trust so successful. £75,000 is a phenomenal amount of money raised and every pound raised is vital in allowing us to support young people so that they get access to the very best treatment, care and support possible and are treated as young people first and cancer patients second.”