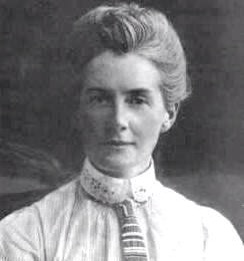 A century on from the First World War, objects on display at IWM North reveal unique stories of women on the front line.

Mairi Chisholm and Elsie Knocker, often referred to as the most photographed women of the First World War, are among the extraordinary women whose war time contributions from a century ago still have relevance today.

Already defying convention before the outbreak of war as keen motorcycle racers and enthusiasts, Mairi and Elsie volunteered as Red Cross ambulance drivers in France. Elsie, a trained nurse, believed that more lives could be saved if wounded soldiers were treated closer to the front line, so at huge personal risk they set up their own First Aid Post to reduce response time for injured soldiers.  This crucial window of time is now well known in medicine as the Platinum 10 Minutes.

Visitors can see Mairi’s uniform and the crucifix she carried on the Western Front in IWM North’s Main Exhibition Space.

Others who broke the mould include Flora Sandes – the only British woman to serve as a soldier during the First World War, and Edith Cavell, the courageous nurse who helped over 200 British, French and Belgian soldiers to escape German occupied Belgium, before being executed in 1915. Flora’s revolver and a copy of the last letter Edith Cavell wrote to a fellow nurse are among the items on display.

Visitors can also discover a collection of Dr Elsie Inglis’ personal items in IWM North’s Women and War display. Dr Inglis’ medical expertise was ignored, when she was told by the War Office to ‘go home and sit still’– this led her to simply start her own medical outpost instead.

Drastic changes to women’s lives brought about by the First World War are explored further in special exhibition From Street To Trench: A World War That Shaped A Region.  Ahead of the General Election,

Charlotte Czyzyk, First World War researcher at IWM North said, ‘There are so many incredible ways in which the First World War marked a turning point for women in society and they began to exceed in roles previously reserved for men, becoming technicians, mechanics and even bus conductors.

This March is a chance for us to share even more stories from our collections of women like Mairi Chisholm and Elsie Knocker, who pushed the boundaries in the way that they defied authority, but always for what they believed were the right reasons.’

Start up or sober up?