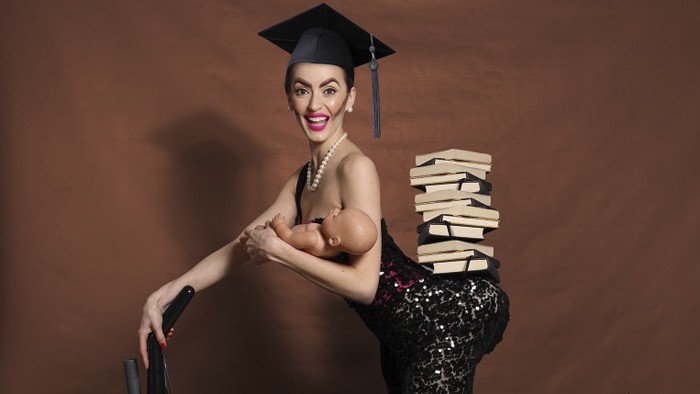 A One women Stand Up Comedy/Feminist Theatre piece is coming to Oldham Coliseum this weekend.

Not Yet Suffragette is a humorous take on how ‘Not Far’ women’s rights have come in the last 200 years since we won the vote.

It premiered at last summers Brighton Fringe Festival to a 5* review and a Broadway Baby Bobby Award nomination for best show.

About Manchester spoke to the women behind it Natalie Cutler.

“Feminist theatre can be very ranty at times and can be a bit alienating,so I wanted to create something that both genders could watch and find entertaining.”

Not Yet Sufferage certain ticks those boxes, Natalie is no doubt passionate about women’s rights but as she says, “is that because I am a women, I am interested in animal rights but I’m not an animal.

Natalie comes from a very theatrical background, starting out at eighteen going around the world with the Disney organization before doing an internship in New York City with the actor’s studio.

There, she saw a lot of the actors and actresses doing their own thing in one man/women shows and was inspired to follow their lead.She signed up to do a stand up comedy course, and the material turning into Not Yet Suffregette.

She wants the story to be told in an inclusive way, hence the jokey way that the play comes across.The message is stripped down to a logical form that makes it quite funny, even bordering on the ridiculous.

Natalie takes some pride in the fact that despite all the headlines, Donald Trumo doesn’t get a mention at all in the show. “It would be too predictable to have updated it to include Trump, the show doesn’t need it.”

There is though some new stuff in it, David Cameron has disappeared for example.

It’s coming to Oldham because Chris Lawson, who is the associate Director at the Coliseum came to see the show’s Premier at the Brighton Fringe. Chris helped Natalie prepare for the tour during the early part of February before it went nationwide.

“What I do want people to go away with is a lightbulb moment, people to think about the serious issue in a different way, that I think is where the humour should lead you too”.

Not Yet Suffragette is playing at the Oldham Coliseum this Saturday Details http://www.coliseum.org.uk/plays/not-yet-suffragette/