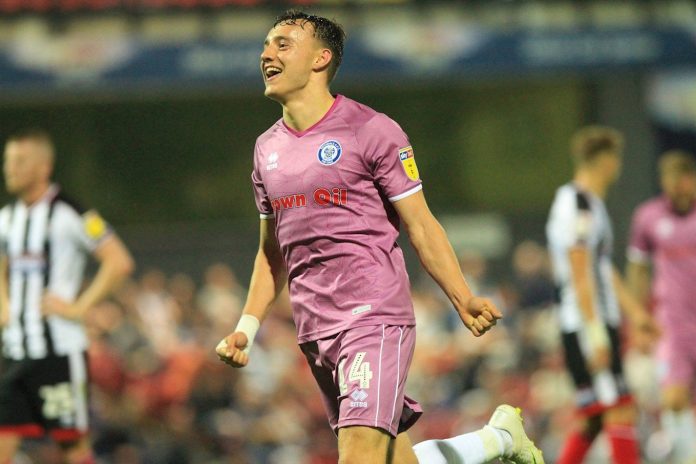 Rochdale were the only team to progress,Ollie Rathbone scored both goals in the victory at Grimsby’s Blundell Park.

He opened the scoring in the first half, latching onto a Harrison McGahey ball over the top and coolly finishing across goal and beyond James McKeown in the Mariners net. He doubled Dale’s advantaged in the second half, firing a powerful snapshot from distance into the bottom corner.

Near neighbours can count themselves unlucky to championship side Nottingham Forest.Ryan Lowe’s side suffered a cruel defeat after a hard-fought performance at the City Ground.

Eoghan O’Connell’s 2nd minute opener looked to be enough to see the Shakers progress into the second round of the Carabao Cup, however his goal was cancelled out at the opposite end of the game as Cash converted from a tight angle with seconds remaining. Nottingham Forest then went on to win 10-9 on penalties in front of the brilliant travelling Shakers.

Bolton Wanderers exited the Carabao Cup in the first round after falling to a narrow defeat to Leeds United at Elland Road.Goals from Patrick Bamford and Samuel Saiz were the difference for the home side, with debutant Erhun Oztumer scoring for the Whites.

A much weakened Wigan went down to fellow Sky Bet Championship side Rotherham.Goals from Jamie Proctor (2) and Semi Ajayi secure progress for Paul Warne’s side, James Vaughan on the mark for Latics while Oldham Athletic fell to a 2-0 defeat at home to Championship side Derby County as Chelsea loanees’ Fikayo Tomori and Mason Mount both scored.