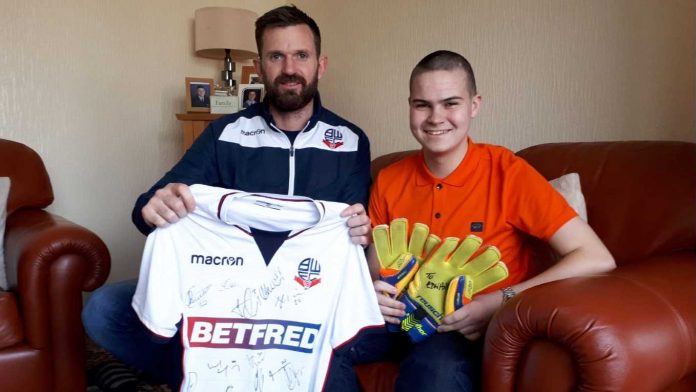 The 16-year-old, who was born in Bolton but moved to Lostock Hall in Preston with his parents Keeley and Chris as a baby, got his first Wanderers season ticket at the age of three and attended Junior Whites football lessons from a young age alongside training with the club’s academy.

In recent years, Edward acted as a ball boy for the club for two seasons before taking up his season ticket once again for the current campaign following the Whites’ promotion back to the Sky Bet Championship.

Unfortunately however, back on March 1, the teenager was diagnosed with a non-germinomatous germ cell tumour of the pineal gland in his brain and as a result, is currently undergoing chemotherapy at The Christie Hospital in Manchester.

A huge Bolton Wanderers fan, some of his treatment sessions have seen him miss watching his beloved team in recent months, with him even watching the Trotters’ recent victory over Aston Villa whilst in hospital.

Upon hearing of his plight however, goalkeeper Mark Howard made the journey to Edward’s family home just outside of Preston, turning up on his doorstep – much to his shock.

Once inside, Mark chatted with the teen about all things Wanderers alongside gifting him with a signed home shirt from the squad, a signed pair of his goalkeeper gloves and various other pieces of club memorabilia.