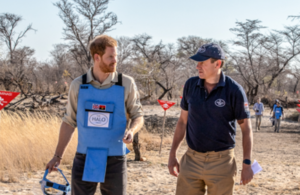 Zimbabwe is still one of the worst affected countries in the world as more than 75,000 people live near mines. Every day people cross dangerous land to reach schools, clinics and homes. Tragically more than 1,600 have lost their lives since the war in the region ended in the 1980s.

This is a widespread problem that is also felt in Angola. Last week The Duke of Sussex retraced his mother’s footsteps in Huambo, Angola, and saw that what was once a dangerous, landmine-littered field is now home to a thriving community.

UK aid, in partnership with demining charities, has helped clear 15 million square metres of landmines in Angola to make it safe again and educated more than 35,000 people about the dangers of mines.

The new UK aid support for The HALO Trust’s Breaking Boundaries appeal aims to repeat the successes of demining in Angola in Zimbabwe.

Clearing landmines is a painstaking process and so often this is done by hand. The UK Aid Match appeal will give communities access to the ‘mine muncher’, a pioneering innovative machine, developed by British company MMD in Derbyshire. This chews up tough ground and has the potential to dramatically speed up the process of clearing mines.

With donations from the British public and the Breaking Boundaries appeal, The HALO Trust hope to clear 105,600 square metres of land in Zimbabwe over 12-months, helping more than 3,000 people get access to safe land which is vital for producing food and creating jobs.

Oldham and Rochdale highlighted among the worst in the country for private nursery schools...

New market on the way for Rochdale town centre