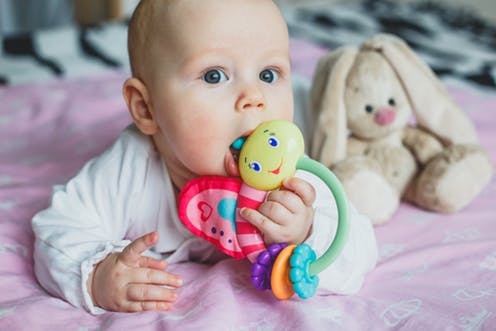 Parents are being warned about the choking risk posed by some teething toys, after almost half of the products tested by Which? failed at least one safety test.

The consumer champion conducted tests on 15 products, in accordance with the British Standard for toys for children under 36 months. The products were bought both from high street shops and online, and were a mix of products that had featured in ‘top 10’ teething toy lists or were prominently listed on Amazon.

The products underwent a “tension test” – which assesses whether any parts that detach are small enough to be swallowed or inhaled – as well as an “impaction test”, which looks at whether a teething toy could block the throat of a child who is too young to sit up unaided.

Five products failed both tests and all were available from Amazon. Four of these – the Silvio Baby Teether and Toothbrush, Gupamiga Baby Toothbrush Teether Infant Toothbrush Corn, Icebleuor Giraffe Baby Teether and the SLGOL Baby Silicone Teething Toys – were purchased through Amazon Marketplace.

The fifth – Gummee Glove – was sold directly by Amazon. It has removed all five of the products it listed.

The sixth product to fail the tension test was Matchstick Monkey Blue Monkey Teething Toy, bought from John Lewis, while the Moustache Teether, produced by Jellystone Designs and sold by slumber-roo.co.uk was the sixth to fail the impaction test. The latter has been taken off sale while slumber-roo.co.uk investigates.

Which? also carried out a third test to assess the 15 toys for levels of phthalates – a group of chemicals that are banned for use in children’s toys by the EU at levels above 0.1% of a product’s total weight. All 15 teething toys contained phthalates within recommended levels.

Just eight products passed all three tests Which? carried out. The consumer champion has reported the failures to the manufacturers, retailers and the Office for Product Safety and Standards.

Which? is urging parents to immediately stop using any products that have failed its testing, and advising people looking to buy a teething toy to choose one that has passed its tests.

This isn’t the first time Which? testing has uncovered unsafe children’s products. In the last year alone the consumer champion has exposed a popular children’s doll sold on the high street that contained phthalates above safety levels, half a dozen toy slimes that failed the EU safety standard for boron and a car seat that was recalled by the manufacturer after crash tests revealed a serious safety issue.

The problem of unsafe toys making it into people’s homes appears to be getting worse. Previous Which? analysis of Safety Gate, a rapid warning system through which 31 European countries warn each other of products with serious safety problems, showed that there were 150 more alerts in 2018 than 2008.

As a series of recent Which? investigations have shown, the growth of online marketplaces appears to be one of the major factors behind this surge. Which? believes that online marketplaces should take greater responsibility for the products sold on their sites and introduce better measures to prevent dodgy dealers having free reign to list unsafe products.

In addition, ahead of the Queen’s Speech, Which? is calling on the government to better protect consumers from unsafe products by establishing the Office for Product Safety and Standards (OPSS) as an independent, arm’s-length, consumer product safety body which has a duty to operate transparently and put public safety first.

Natalie Hitchins, Head of Home Products and Services at Which?, said:

“The safety of teething toys should be absolutely paramount, so it’s shocking that such a high proportion of the products we’ve tested could put children at risk of choking.

“Manufacturers that cannot guarantee the safety of these products must recall them as a matter of urgency, ensuring that they are taken off the shelves and out of people’s homes.

“With the influx of unsafe products arriving through online marketplaces pushing the product safety system beyond its limit, the government must now make urgent reforms to ensure it is fit for purpose.”

Jailed after he trapped his neighbours in their flat and tried to burn it...