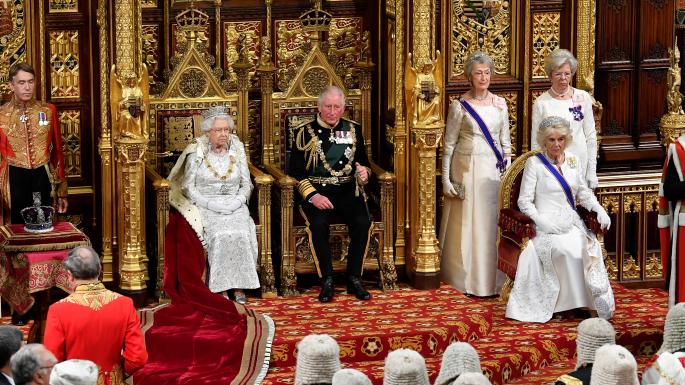 In all there are twenty six bills,  an immigration bill to ‘pave the way for a new points based system’, an environment bill ‘to fight air pollution’ and a sentencing bill to ‘see that the most serious offenders spend longer in custody.

Without a majority in the House of Commons no one expects the measures outlined today to pass even the first hurdle of a vote in parliament next week. This would be the first time that a Queen’s Speech has been defeated since 1924.However many of the measures are expected to form the basis of a future Tory manifesto.

Other measures include strengthening environmental protections, reforming adult social care and improving the NHS, and raising living standards through increasing the national living wage to £10.50 an hour.There are also bills to speed up the delivery of internet broadband, make it easier to repatriate holiday-makers if their airline goes bust

For this part of the country, perhaps the most interesting development will be the hints over the future of rail franchising.

The system that was set up as part of privatisation in the 1990s is set to be abolished,but there will be little substance until the details from the Department for Transport, when it publishes the outcome of the Williams Review in the next few weeks.

Keith Williams has already said that the present system ‘cannot continue in the way that it is today. It is no longer delivering clear benefits for either taxpayers or farepayers’.

However General Secretary of the Rail Union Mick Cash said;

“As we suspected all we are getting is the current failed rail franchising model re-packaged and re-branded. It’s the same old “commercial model” and the Tory principle that profits and privatisation come first remains locked in. Nobody will be fooled by this “same meat, different gravy” pre-election stunt from Boris Johnson and the Tories.

“Private operation of our railways in incompatible with reliable and high quality services, lower fares and investment in infra-structure as the train companies will always suck the life blood out of the system in profits and dividends. That is a cold hard fact.

“Trying to repackage the racket of franchising for political purposes will fail. Ruling out the public sector option exposes the whole policy for the sham that it is. We need a nationalised railway where quality, investment, planning and safety come first. That policy will attract millions of voters at the coming general election. ”

“Our failing transport system lets Northerners down every single day, and holds back the region’s economy.

“Since the Government started talking about the Northern Powerhouse the number of late and delayed trains has doubled, while public spending on transport has increased by twice as much per person in London as it has in the North.

“Government’s infrastructure and rail reforms must see long overdue investment in transport , which must become accountable to the people of the North. Our railways should be controlled by the North’s mayors and Transport for the North. Only then can they serve the people living here”.

Responding to the Queen’s Speech, Mayor of Greater Manchester, Andy Burnham said: “We have long argued that the London-centric nature of our country needs to change and the Queen’s Speech highlighted that better decisions can be made at a local level, rather than in Whitehall.

“People here have been calling for action on transport, the housing crisis and support for our young people but Whitehall has failed to deliver time and again. If this promised devolution White Paper is to be meaningful it must give us the freedom and funding to deliver in these crucial areas. The Government’s approach must be shaped and agreed in advance with Mayors and other local leaders.

“A vital opportunity for ministers to show they are listening to local leaders would be to ensure that their National Infrastructure Strategy implements the recommendations of the National Infrastructure Commission. This would mean long-term, stable, substantial devolved funding so that city-regions can develop the London-style transport systems we so desperately need.

“I once again welcome the commitment to reform our rail system and give areas like Greater Manchester more local control. However, ministers should be prepared to consider legislating if necessary to deliver these much-needed changes.

“Greater Manchester has led the way in improving the quality of social care and integrating it with health services. This Queen’s Speech once again identified the need to reform funding of social care services but what has been proposed does not sound like the solution we need. Urgent action is desperately needed given the scale of the crisis that local authorities face – ducking this challenge and passing the buck yet again on to local council tax payers is not acceptable. We need a long-term solution for social care, based on the NHS principle whereby everybody contributes and everyone gets the care they need.

“Today the country needed a Queen’s Speech that sought to rebuild consensus and national unity. What it did not need was a partisan and divisive Voter ID bill. This measure requires an urgent rethink.”