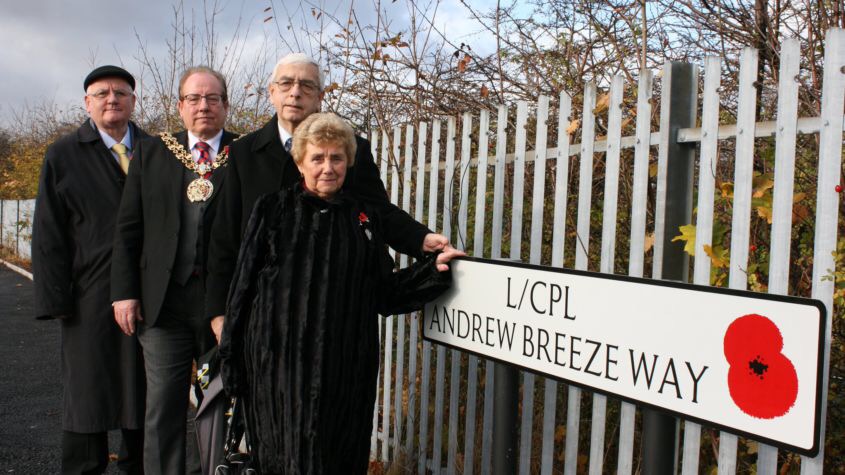 THE new Denton link Road is to be named in honour of a former Tameside school pupil who lost his life while serving in the Army in Afghanistan.

Lance Corporal Andrew Breeze was 31 and serving under the B (Malta) Company, 1st Battalion of The Mercian Regiment (Cheshire), when he was caught in an explosion and killed while clearing an area to increase security at a checkpoint on 12 June 2010.

The former Audenshaw School pupil and member of the Church Lad’s and Girls’ Brigade at Christ Church, Denton, had enlisted into the Army in February 1996 and served in both the UK and Cyprus as well as on operations in Northern Ireland, Iraq and Afghanistan.

The new Denton Link Road, due to open early next year, has been named Lance Corporal Andrew Breeze Way in tribute to the soldier. The move forms part of Tameside Council’s pledge to name new streets built in the borough after local servicemen and women who have died in service.

RBLI is a self funding company that employs ex-servicemen and women, supporting them with rehabilitation and giving them a purpose in life where they may not have always felt they had one. The road signs for L/Cpl Andrew Breeze Way have been made by two Gurkhas, one of whom is a medal winner from both the 2014 and 2016 Invictus Games.

Cllr Quinn said: “At a time when the whole nation remembers its fallen, it feels particularly fitting that we are paying tribute to Andrew and also the many other local service men and women who have died for their country. This honour is for all of them.”

Mr Breeze said: “Although this is a trying and difficult time as the memories of what happened to Andrew still really hurt, we feel very proud that our son is being honoured in this way. We are very supportive of the Armed Forces and all who serve in them and it’s good to know they also have the support of the local community.”

As part of the commitment to honouring local service men and women who have lost their lives while serving in the armed forces, the Council is asking people to nominate a fallen hero who they would like a street to be named after. For further information and to nominate see www.tameside.gov.uk/honourourfallen

The new Denton Link Road will connect Ashton Road with Hyde Road, bypassing the Crown Point junction – a long-standing bottleneck on a key Tameside to Manchester route. The new road is part of the comprehensive mixed use redevelopment of the former Oldham Batteries site, regenerating the area and bringing it back into beneficial community and economic use.