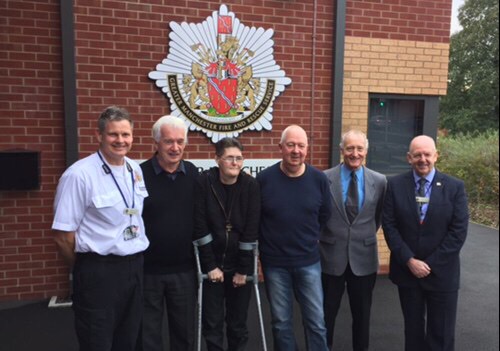 A woman from Rochdale has thanked firefighters who rescued her and her sister from a house fire in 1978.
43-year-old Catherine Dearden met retired firefighters Allen Buckley, 69, and Dave Jones, 60, who she has not seen since the incident.
The reunion took place at Rochdale Community Fire Station and was arranged following an open day in September where Catherine spoke with Station Manager Mark Doggett from Greater Manchester Fire and Rescue Service (GMFRS) about the fire and how she hoped to thank her rescuers one day.

The incident happened on December 1, 1978, and involved Catherine’s family home in Blackstone Avenue, Belfield. At the time Catherine was five-years-old and she sustained burns from the fire and her sister Andrea was four-years-old.

SM Mark Doggett said: “At the open day I was approached by Catherine, who informed me that when she was a young child her family was involved in a house fire during which she sustained severe burns.

“Catherine told me how she was rescued from the property and had CPR from firefighters and has never had the opportunity to say thank-you to these heroes for saving her and her family members’ lives. This is something she regrets and would deeply love to do.”

A plea to find the firefighters who rescued Catherine and her family was made via an article in GMFRS’ staff newsletter as well as other methods. This resulted in retired firefighter Bob Bonner, who manages the Service’s museum, using old newspaper clips to track down two of the firefighters who attended the incident.

At the reunion Catherine expressed how thankful she was for GMFRS arranging the event. She said: “I really feel like meeting Allen and Dave has brought closure to what happened to me and my sister in 1978 and helped me with some unanswered questions I had.

“I am really grateful for what the firefighters did on the night of the fire, without them I may not be here. I have always wanted to personally thank them for saving mine and my sister’s lives. I also want to thank everyone who has helped make the reunion happen.”

Talking about the incident, retired firefighter Allen Buckley added: “During my 33 and a half years of being a firefighter I dealt with thousands of incidents, however, this house fire really stood out and was rewarding for us at the time as we rescued two young children.

“I am really appreciative of Catherine for wanting to meet us after all these years. We have exchanged contact details and plan to stay in touch.”

LATEST UKRAINE-Bombardment continues in the East,while Ukraine claims half a million people have been...