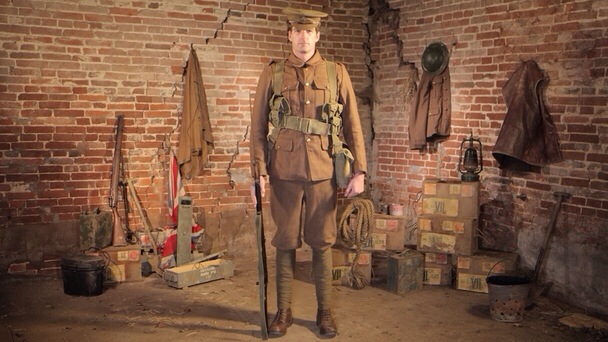 As part of its World War One Season the BBC has today announced a new commission exclusively for BBC iPlayer, called WW1 UNCUT. The collection will see 12 episodes launch in total, starting from the 10 April and throughout spring 2014.

Produced by Ballista Media, WW1 UNCUT consists of a series of short films that explore a variety of defining World War One features. From the trenches and a soldier’s kit to war myths and weapon testing, the shorts explain war topics in an educational yet entertaining way, giving the content a fresh and current feel.

Historian and broadcaster Dan Snow will be the collection’s lead presenter; other presenters include Michael Douglas, Dr Saleyha Ashan and Sam Willis.

Dan Snow says: “I was really excited about the opportunity to create content without the restrictions of a linear schedule; producing this for BBC iPlayer let us tell these war stories in a short, snappy and fun manner. From a production point of view, it made us take a new approach to content making and gave us the chance to bring history programming to a new audience. We had a great time during filming; we’re really pleased with how the shorts turned out and hope the audience, both young and old, will like the collection as much as we do.”

Whilst Tim Plyming, Executive Producer, BBC Knowledge & Learning added : “BBC iPlayer feels like the perfect home for these films and we can’t wait to share it with our audiences – wherever they are, whenever they want to watch it.”

The first three episodes from the collection are:

The battlefields of the First World War were full of trenches and barbed wire. Why?

The trench and trench warfare is one of the defining features of the war. Over 400 miles of trenches stretched across the Western Front. But why exactly? What were the conditions that made a hole in the ground the only possible way to fight the war? Dan Snow attempts to answer one of the most fundamental questions the conflict by putting his occasional sparring partner in history, The One Show’s Michael Douglas, into a crude but effective mock-up of the dilemma that faced the infantry at the start of the war.

Dan also picks apart another hugely significant, low-tech feature of the WWI battlefield that is often overlooked by histories of the war. Tanks, machine guns, relentless artillery: these are the familiar weapons of war. Barbed wire was first put into use to corral livestock in America’s Wild West and before long the military was putting it to devious use on the battlefield. Dan builds a typical WWI barb wire trap, tries to cross a particularly devilish design while in a thicket of smoke, and reveals why one of the worst jobs on the Western Front was a place on a night time wiring party.

An army lives or dies by the uniform, weapons and kit it issues its men with. So in August I9I4 who was the best equipped to wage war? Dan Snow gets to grips with the webbing, explains the genius of leg wrap puttees, reveals the best gun on the Western Front and in a showpiece stop-motion sequence reveals the evolution of the British soldier’s uniform.

And what about food? We all know Napoleon’s famous maxim about an army marching on its stomach. But when it came to the war menus of WWI, who was fed better – the British or German infantryman? Dan Snow picks over the daily rations of each army to see how trench diet and nutrition compared.

In WWI it wasn’t easy to get out of the trenches. Lots of different weapons were needed. One in particular…

By 1915 there was a clear and undeniable stalemate across the Western Front. The weapons that the armies of the war took into battle were better for defending than attacking. Soldiers attempting to cross No Man’s Land were too easily shot and shelled down by the enemy leaving them with no choice but to bunker down into the notorious trenches that have become synonymous with the war.

Dan Snow begins this film by attempting to explain to his One Show colleague and some-time history sidekick, Michael Douglas, how the deadlock was broken. Dan takes Michael on a quick-fire tour of how they finally came up with a solution that was as ingenious as it was simple: lots of soldiers, better weapons, perfectly co-ordinated.

If there’s one weapons system involved in breaking the trench stalemate that warrants particular attention it is the tank, a weapon invented by the British to deal with the very specific problem of trench warfare. It was one of the great innovations of modern warfare, a real game-changer that helped turn the course of the war. Dan Snow is allowed special access to the Tank Museum in Bovington, Dorset, where he climbs inside, on top and all around these beasts of the battlefield in order to explain not only how they changed the nature of warfare but how they rapidly evolved from the 1915 prototype Little Willie, the first tank, through to the iconic Mark IV, the comparatively speedy Mark A Whippet tank and the huge International, an Anglo-American designed tank that showed how far this revolutionary weapon had changed within just a few years of its invention.