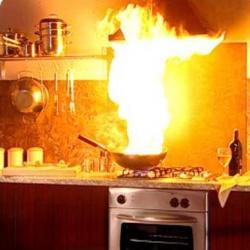 The Cook Safe campaign urges residents to be aware of the dangers of cooking-related fires and take simple steps to keep themselves and their families safe in the kitchen to help prevent fires.

It follows the sad deaths of four residents as a result of suspected chip pan fires, making this the first-time they have been the main cause of fire related death since 2007/08. Chip pans also accounted for 40% of all accidental fire deaths in the home in 2021.

Firefighters were called to 752 accidental cooking fires in the home in 2021, nearly half of all accidental dwelling fires that the Service responded to last year.

There are some simple steps you can take to reduce your risk of fire in the kitchen:

Don’t use a chip pan. Try oven alternatives or use a thermostatically controlled fryer

Never leave your cooking unattended
Don’t get distracted while cooking

As part of the campaign Greater Manchester residents will see messages across social media as well as on buses and local media on how to stay safe in the kitchen.

Area Manager Billy Fenwick, GMFRS’ Head of Prevention said: “Tragically, we saw a number of deaths relating to cooking fires last year. This highlights the devastation fires in the home can cause and why it’s so important to take care in the kitchen.

“Around half of all accidental fires in the home start because of cooking and we want to work with our communities to keep people safe and reduce the number of cooking fires we attend.”

“My plea to residents is please take care in the kitchen by following our simple advice on how to cook safely.”