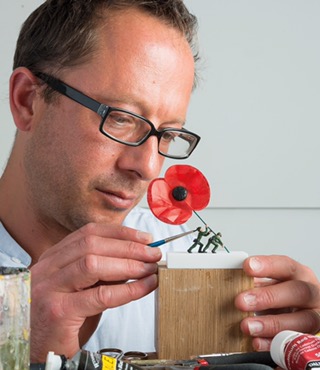 Innovative British Artist, Nic Joly has raised £60,000 for the The Royal British Legion through the sales his limited edition artwork ‘Never Forgotten’, which is available at Castle Fine Art, Manchester.

Over the past year, Nic Joly’s poppy sculptures have been available to buy at Castle Fine Art, Manchester with £100 from each sale being donated to the biggest Armed Forces charity. Drawing on the ultimate symbol of Remembrance and hope, the poppy, the poignant piece was released last year ahead of the 100th anniversary of the outbreak of the First World War. 600 of the 1,566 editions have now been sold, tipping the total money generated for the Royal British Legion to £60,000.

Each of the 1,566 pieces are hand crafted by Joly, and each represents a day the war was fought, with individual sculpture labelled on the back with a unique piece of information about that day during the Great War. Joly uses bronze to craft the figures and tissue paper to form the petals of the poppy, with the miniature sculptures standing on a block of white marble. The former furniture maker also hand makes frames the intricate pieces in his studio in Hampshire.

Standing less than two inches high unframed, the tiny sculptures have been making a big impact – they have touched the hearts of people around the world with Joly receiving letters of thanks from as far afield as Canada, New Zealand and Japan. People are purchasing the piece for deeply personal reason, including a lady who bought the sculpture as an engagement present for her fiancé wounded in Afghanistan and an ex-Serviceman who remembers his fallen comrades when he looks at the piece.

Joly, who was inspired to begin the ‘Never Forgotten’ project after meeting a 96-year-old Battle of Arnhem veteran, said:

“I have met some wonderful people since the launch of the Never Forgotten project, from WWII veterans to double amputee soldiers from the Afghanistan conflict.  Their stories put the world we live in into a crystal clear reality of what is important in life, we can learn so much from these unsung heroes.

“In my own small way, I want this piece to remind us that all those who have given their lives, in conflicts from the First World War until the present day, will be Never Forgotten.

“The Legion is an incredible charity and I am so happy that we’ve been able to raise £60,000 The money raised will go towards helping the Armed Forces, veterans and their families in need.”

Joly’s support for the Armed Forces is also seen in his ‘141 Days’ project, which he launched earlier this year to commemorate the 100th anniversary of the Battle of the Somme. Referencing the amount of days the battle spanned, ‘141 Days’ has seen 141 golden figures holding red poppies – standing at just 50mm tall – placed on war memorials nationwide, and overseas in countries, which also contributed to the war effort. The project, which made headlines and was even featured on the One Show, will draw to a close on 18 November.

“Each of Nic’s 1,566 pieces may look the same – but they are all unique. With information relating to a specific day in WW1 on the back of each sculpture, each piece is as individual as every day of the war, and every life lost.

“Every piece is painstakingly created by Nic, who crafts every single figure himself ensuring the composition is perfectly balanced and tells the story he intended. ‘Never Forgotten’ is a beautiful tribute to those who have sacrificed themselves to secure and protect our freedom – we are honoured to be involved in the project.”

‘Never Forgotten’ is available to view and buy at Castle Fine Art, 12-14 King Street, Manchester, M2 6AG and are priced at £695. £100 from each sale will be donated to The Royal British Legion.

Two charged after armed robbery on delivery van in Gorton