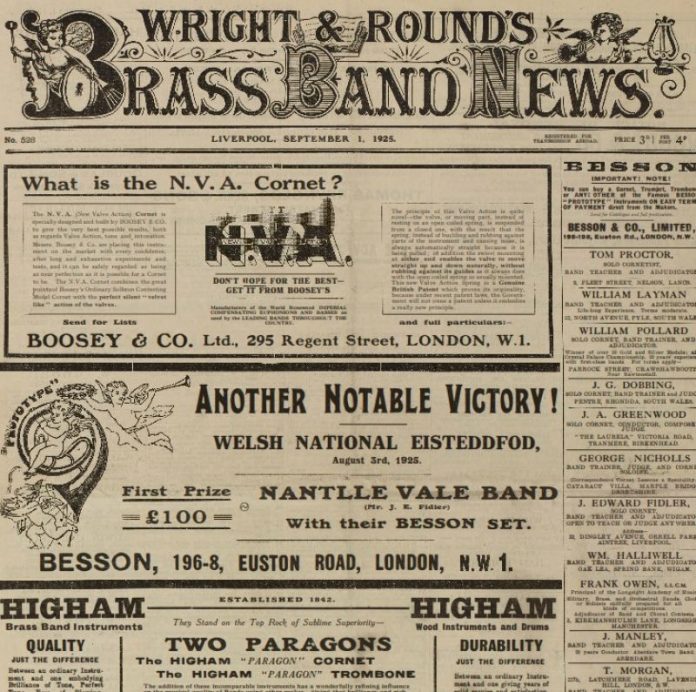 The University of Salford Library is making the world’s largest collection of Wright & Round’s Brass Brand News available digitally for the first time.

Wright and Round’s Brass Band News was Britain’s first brass band newspaper and was published from 1881 until the 1950s, when brass band music was central to British culture.

The University of Salford Library will launch this fantastic collection at their Brass Band Celebration concert at 7pm in Peel Hall on Wednesday 9 May.

Trever Herbert, Emeritus Professor of Music at the Open University and Research Fellow at the Royal College of Music, thinks that this digitisation opens the door for people to launch new research projects and browse the history of brass bands.

He said: “Wright and Round’s various commercial endeavours were fundamentally important to the cultural unification of brass bands in Britain, and none were more important than its monthly newspaper, which was awaited with enthusiasm across the country from its launch in 1881 to its closure in the 1950s.”

Dr Roy Newsome, a world-renowned composer and former Visiting Fellow at the University of Salford, tirelessly put together a Brass Band collection. Dr Newsome always referred to Brass Band News as the “jewel in the crown” of the collection.

The entire collection was presented to the University Library following Dr Newsome’s death in 2011.

David Clay, University Librarian, said: “It is very exciting to be bringing this material to a wider audience through the publication of Wright and Round’s Brass Band News as a free and open digital resource. It will serve not just the brass band community, but a much broader array of musicologists, cultural historians and creative media practitioners.”