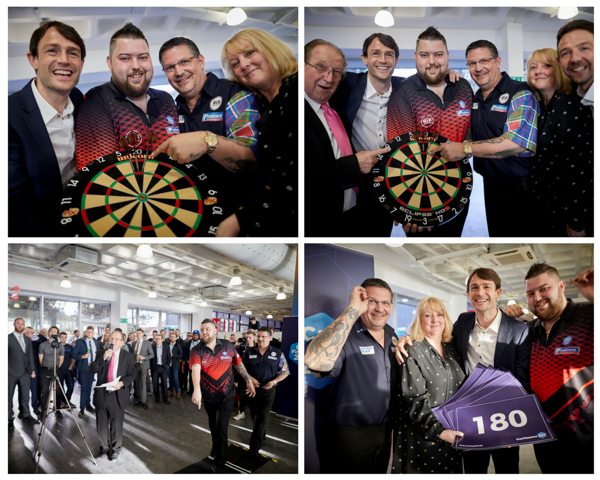 Last week saw world darts legends Michael Smith and Gary Anderson go head-to-head in a charity darts tournament at the Manchester HQ of CarFinance 247.  With proceeds being donated to Forever Manchester, the event raised an impressive £6,432.

Staff and customers had oche-side seats for the action between these two titans of the dart playing world.  In a tense fifteen minutes, Gary Anderson – the Flying Scotsman and two-time PDC World Champion – and Michael Smith, who was the 2013 PDC Under-21 World Champion and has since won six titles on the PDC Pro Tour, put themselves to the test to see how much they could raise during this time.

£50 was donated for a Bullseye, treble 20 gifted the charity £180 and there were also pounds up for grabs for a double top and double 16. Having already raised £3,216 during the challenge – CarFinance 247 upped the stakes and tasked the darts legends with doubling the donation if they both hit a chosen double, which they did!

The result was £6,432 for local charity Forever Manchester.

Amy Smith, marketing manager at online car finance firm CarFinance 247, said: “What a night!  The excitement was nail biting with each arrow thrown.

“We’ve sponsored both Michael and Gary over recent years, and so to have them visit our office to entertain the team and customers was phenomenal.  The event was also an opportunity to celebrate our new offices at Universal Square, so there was a great mix of people in attendance and spirits were high indeed.  We’re delighted to be able to show our support for the amazing work undertaken by Forever Manchester with this donation.”

Forever Manchester’s chief executive Nick Massey said: “Huge thanks to everyone at CarFinance 247, we hope to be able to fund many more local projects with this fantastic donation.  It’s great when Manchester businesses back our charity – it all helps the city to become a better place for one and all.”

Amy continued: “Fundraising is an integral part of our team’s social activities and everyone is encouraged to get involved to support both local and national charities.

“Last year CarFinance 247 gave more than £47,000 in charitable donations, a large proportion of which came from our Payroll Giving Programme that supports motor industry charity BEN. A highlight was also that founders Reg and Louis Rix were also lucky enough to be invited to ride alongside Sir Richard Branson during the Virgin STRIVE Challenge. They cycled more than 745km around Italy to raise money for the charity Big Change.”

Forever Manchester raises money to fund and support community activity across Greater Manchester. It funds and supports a huge range of activities that help young people, older people and disabled people, as well as homelessness, sports, environmental, education, and cancer support projects, plus everything in between. It works with local communities to inspire and encourage projects that they want to see, to make their neighbourhoods happier, healthier and safer places to be.

Manchester business CarFinance 247operates nationwide and employs more than 450 people, based within its new offices in Universal Square, where it occupies three floors.

Warning-Beware of the plant which burns your skin