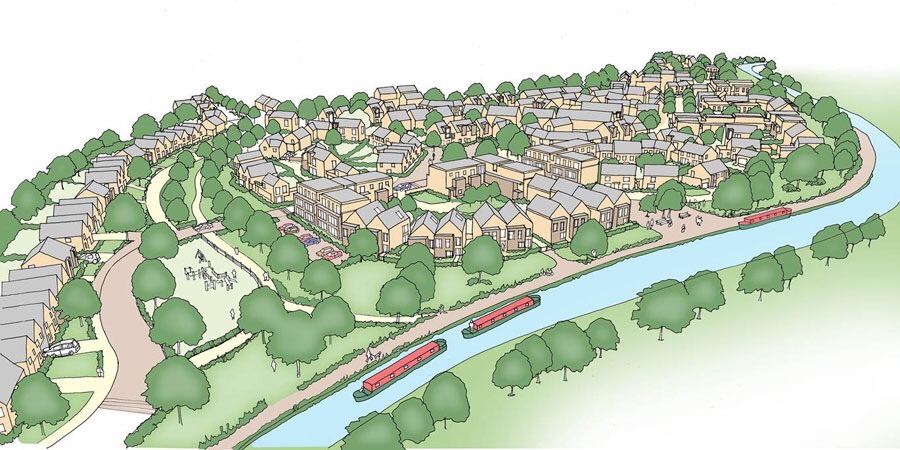 An outline planning application for up to 470 homes set in an attractive landscaped waterfront park in West Leigh has been submitted to Wigan Borough Council.
The proposal is to create a mixed residential development next to the Leigh branch of the Leeds & Liverpool Canal. The site is jointly owned by the Rivers and Canal Trust and Wigan Council.

Plans include a variety of homes from apartments and two bedroom starter homes to three and four bedroom family homes. The application also features a new cycle-friendly footbridge giving better access from the proposed development to Pennington Flash Country Park, south of the canal, as well as to the wider area including Leigh Town Centre.
A quarter of the 20 hectare site will be retained as open land, including a woodland area separating the site from the Taylor Wimpey Marina development to the west. An upgraded cycle route and surfaced pathway set within parkland on the northern canal bank will link into the Marina development.

A linear landscaped park will also be created between Mersey Street and Radnor Drive, providing a pleasant north-south connection through the site from Firs Lane to the canal.

Existing quiet residential cul-de-sac roads south of Firs Lane and Plank Lane will not be linked into the development site by road but some will have pedestrian and cycle pathways to help local residents access the waterside parkland and footpath network to Pennington Flash and beyond more easily.

Vehicle access to the site will be restricted to two main routes. These will be via a new three arm roundabout constructed on Plank Lane at the western end of the site and on the eastern edge, a fourth arm will be added to the recently constructed roundabout at the Firs Lane/Wigan Road junction.

Cheryl Blount-Powell, Canal & River Trust senior development manager, said: “We held a public consultation event last September and listened to many different views about how the development should look. More than 300 people attended this event and dozens more responded by email or through our website.

“We have listened to the concerns of local residents particularly about access and the loss of open land. As a result, we have carried out further studies and increased public landscaped areas and restricted road access to two main entry points at either side of the development.

“The proposed new footbridge will give enhanced access for residents walking or cycling to the beautiful Pennington Flash Country Park. We are proposing safe places for children to play and new cycle routes and footpaths. The public open spaces will be landscaped, providing an attractive place for local residents wanting to enjoy the waterside scenery, walk their dogs or take a pleasant off-road route into Leigh town centre.”

Karl Battersby, director economy & environment from Wigan Council added: “We have been working jointly with the Canal & River Trust over a period of time to prepare this scheme. It will provide new housing in a canal-side setting close to Leigh town centre.”

“We are required to build an extra 1,000 new homes per year in the borough and this former colliery spoil site, along with a number of other sites, will make a major contribution to the council meeting that commitment to the borough’s residents.”

Frankincense is found in Roman British graves for the first time