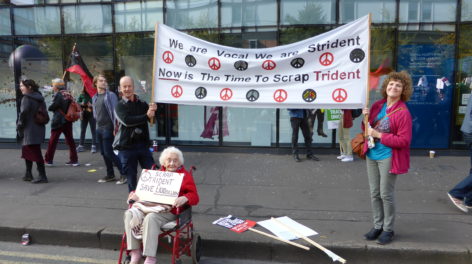 International activist and women’s rights campaigner Betty Tebbs will be sharing the incredible story of her life fighting for equality and for freedom, as guest of honour in the first Radicals Assemble! a series of after hours events at the People’s History Museum on Thursday 9 June from 6.00pm-8.00pm, as part of Manchester Histories Festival 2016.

Hosted by actress, activist and patron of Manchester Histories Maxine Peake, tales of Betty’s heroic activism will be told, from her very first protest for equal pay at the Radcliffe paper mill where she worked in her teens, to her lifelong involvement in trade unionism.  Following World War II in which she lost her husband, she turned her attention to campaigning for peace and against nuclear weapons. Her voice has been heard internationally, including speaking at the peace talks in Geneva during the Cold War, and more recently getting arrested outside Trident at the age of 89.

Betty lived in Warrington in the 1950s with her second husband and two children.  Here she campaigned against council rent increases. When she was 60 she helped set up the first battered women’s refuge in the town where the head of the Council Housing Committee had claimed, “We don’t have battered women in Warrington.”

Betty recently turned 98 and will be sharing these and many more stories of her life as a campaigner. As a woman who has never sat back for the world to change, she has and continues to do whatever it takes to change the world around her for the better.  For this reason she has been named as one of the People’s History Museum’s Radical Heroes. The evening promises to be an inspiring opportunity to celebrate the life of a unique and powerful woman, who works tirelessly for the causes so important to her.

This is a free event and part of the Manchester Histories Festival 2016, of which Maxine Peake is a patron.  To book go to http://www.phm.org.uk/whatson/radical-hero-an-audience-with-betty-tebbs/

House collapses in Chorlton as storms batter the region