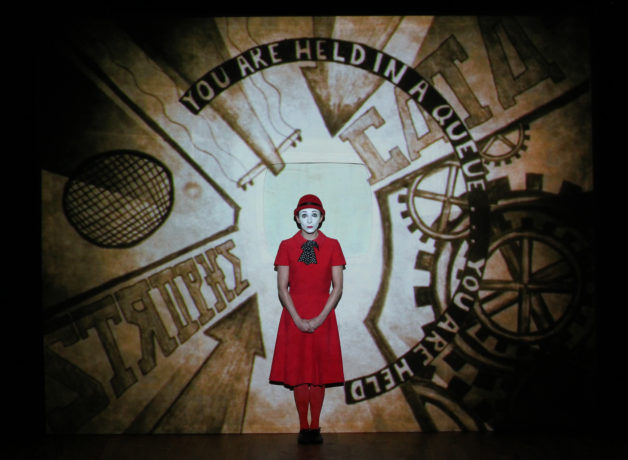 Following eight years of international touring award-winning shows, 1927 revive The Animals and Children Took to the Streets, their atmospheric smash hit show first seen in 2010, which calls into HOME in Manchester between Wed 6- Sat 16 February 2019.

Written and directed by Suzanne Andrade, with animation, film and design by Paul Barritt, The Animals and Children Took to the Streets seamlessly synchronises live music, performance and storytelling with stunning films and animation, in classic 1927 style, as seen in the company’s Golem, which played to packed houses at HOME in October 2015.

This wickedly twisted show tells the story of the Bayou Mansions, a sprawling stinking tenement block, where curtain-twitchers and peeping toms live side-by- side and the wolf is always at the door. When Agnes Eaves and her daughter arrive late one night, does it signal hope in this hopeless place, or has the real horror only just begun? Like a giant graphic novel burst into life, 1927 invite the audience on a theatrical journey of startling originality.

“The Animals and Children Took to the Streets was the second show we created,” recalls 1927 Executive Producer Jo Crowley. “When it first premiered many commented on the prescience of it coinciding with student protestors being kettled in Westminster and just a few months later, as the show toured across the UK, the streets of our major cities were taken over by rioters.

“When we toured the show to the Middle East in the wake of the Arab Spring, audience members thanked us for creating a show that resonated deeply. The show is universal fable of revolution, anarchy, social mobility and suppression that we think is as relevant now as it was eight years ago. We’re delighted to be breathing new life into The Animals and Children Took to the Streets and reviving it to share to new audiences in the UK and overseas.”