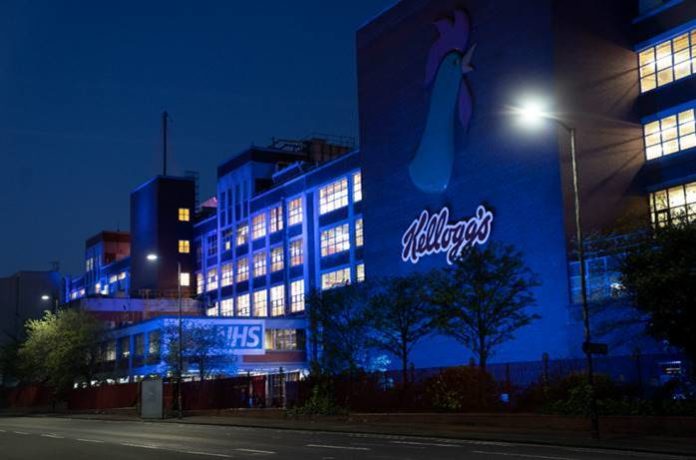 Cereal giant, Kellogg’s, lit up its Trafford Park factory blue to honour the NHS and keyworkers across the UK.

More than 30 colleagues from the Park Road facility paused their work to join the nation’s weekly round of applause, whilst other team members loaded up their cars with food donations to be delivered to various sites across Greater Manchester.

The news comes after the Manchester headquartered business also committed to distribute a minimum of three million servings of food with its charity partners, to food banks, schools, charities and NHS staff nationwide. NHS workers can visit kelloggs.co.uk to request donations of cereal or snacks for their hospital staff rooms.

As the largest cereal factory in Europe, and the birth place of Kellogg’s Crunchy Nut, the site produces one million boxes of cereal per day and this year opened its doors to Channel 5 for an hour-long documentary unveiling the secrets behind the cereal giant’s iconic products.

Paul Wrigley, site leader at Kellogg’s Manchester factory in Trafford Park, said: “I’m so proud of our dedicated team here at our Manchester factory who have been incredibly busy, ensuring we’re able to provide food to families across the UK and those who need it most – from NHS workers, to charities and food banks.

‘’At this time, we want to support however possible and we were delighted to be able to light up our factory in NHS blue and show our appreciation to the tireless work being put in by our NHS and Social Care colleagues in Manchester and across the UK.’’

Kellogg’s, which has had its UK headquarters in Manchester since 1938, employs more than 1,000 people across the city-region at its Trafford Park factory and office in Salford’s MediaCity. Last month, the business received almost 400 applications as it opened up roles at its factory to meet the increased demand for food.

Police help spread the rainbow and spread some joy across Trafford