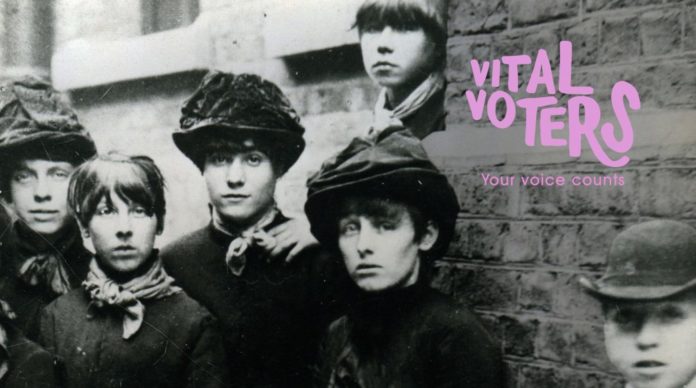 People’s History Museum(PHM) launches a new project that invites young people to connect with and explore what democracy means to them.

Vital Voters is a way for under 18s to experience for themselves what a powerful force for change democracy can be.  The project has been developed by the team at the national museum of democracy, with the support of UK Parliament, Speaker’s Art Fund and Nesta’s Amplified fund.

To understand the workings and possibilities that democracy presents, you have to live it for yourself, and Vital Voters is designed to inspire the thinking and imagination of young people, so they can do just this.  It launches on the anniversary of the date (17 April 1969) that the 1969 Representation of the People Act was passed, which lowered the voting age in the UK from 21 to 18.

With young people becoming active citizens at a much earlier age, the future of the voting ageas it stands is one of the topics that some might explore through Vital Voters.

Vital Voters is a digital project first and foremost, with all the resources and information available online to enable young learners to take part, whether in the classroom or at home.  This means the current COVID-19 lockdown will not get in the way of democracy.

Participants are taken through the past, present and future of democracy in Britain so that they can see where it has come from, the difference it can make, and how it can underpin progress and change.  Colourful digital content, that includesanimations and short films, forms the backdrop.  Some of this has been created by the Vital Votersvloggers Samuel, Jonah, George, Ellie, Kayleigh and Rhiannon, who are all students at Westleigh School in Leigh.  Their reports follow a journey that takes them from the archives at People’s History Museum to the steps of 10 Downing Street.  You can view their films here: https://phm.org.uk/vital-voters/past/

Vital Voters vlogger Ellie, a Year 9 student from Westleigh School in Leigh, says, “I believe that the youth do have the power to make their voices heard if they just had the opportunity. They are more powerful than they know and, with help, they will grow into the generation who revolutionises life on Earth. As a member of the Vital Voters project, I firmly believe that the youth can change the future but it starts in the present.”

Vital Voters are challenged to consider how they can bring about change through the creation of acampaign film.  Once submitted the very best will appear online as part of a gallery of Vital Voters campaigns.

To give inspiration to those taking part, a series of shorts has already been created, which can be viewed here: https://phm.org.uk/vital-voters/future/. Working with People’s History Museum, groups of students from Westleigh School in Leigh have captured the issues that matter to them; Football Racism, Help Hedgehogs Now! and Invest in Railways.

Katy Ashton, Director of People’s History Museum, says, “Vital Voters has been innovatively created to empower young people, so that they are not just learning about democracy and parliamentary processes, but also have a platform to share their own ideas to give a voice to what matters to them, in a bid to bring about change. As the national museum of democracy, we have great ambitions for this project and the impact that it can have with young people.”

Vital Voters is open to anyone under 18 to participate, with schools in Greater Manchester also being offered the opportunity to book a Vital Voters workshop.  These will take place at People’s History Museum for students from Key Stage 2 to Key Stage 4, and are expected to begin as soon as the current situation allows.

To find out more about Vital Voters and how to take part visit https://phm.org.uk/vital-voters/.  Greater Manchester schools can also register interest in a Vital Voters workshop by emailing vitalvoters@phm.org.uk.