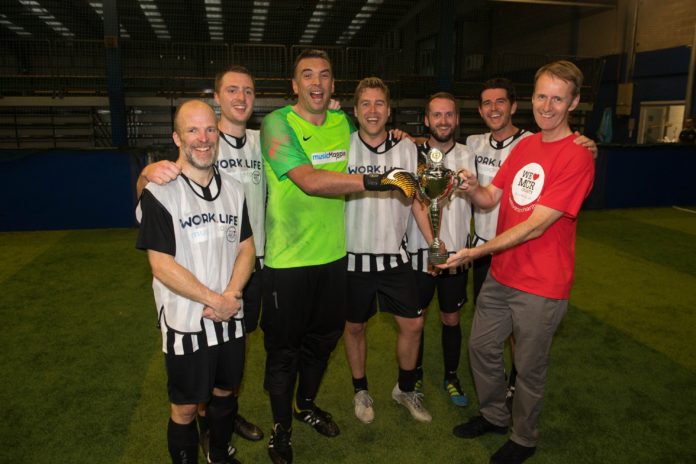 A five-a-side tournament for Manchester businesses has raised over £2,000 for charity last night.

The event, which was run by Manchester co-working space, Work.Life, raised £2,006 for We Love MCR – the Lord Mayor of Manchester’s charity to support young people and communities across Manchester.

Sixteen teams took part in the football tournament, including LadBible, AO.com, Deliveroo, Mercarto and musicMagpie, who eventually took home the trophy after beating LSC in the final.

Continuing its focus on workplace wellbeing, happiness and community, Work.Life’s inaugural tournament was open to businesses across the city and was held at FIVES Soccer Centre (formerly Powerleague), Trafford, who also donated £400 to the charity.

Work.Life launched in November with the backing of a number of high profile entrepreneurs including Sacha Lord (Co-Founder ,The Warehouse Project and Parklife), Nick Speakman (Founder, SPORF) and Karina Jadhav (Founder, Menagerie), and focuses heavily on bringing the community together.

It also holds ongoing open days, including Freelancer Fridays from August, where freelancers and consultants across the city are welcome to work from the city centre space for free. Freelancers can email manchester@work.life to find out more.

Greater Manchester Musicians to raise the roof for the homeless