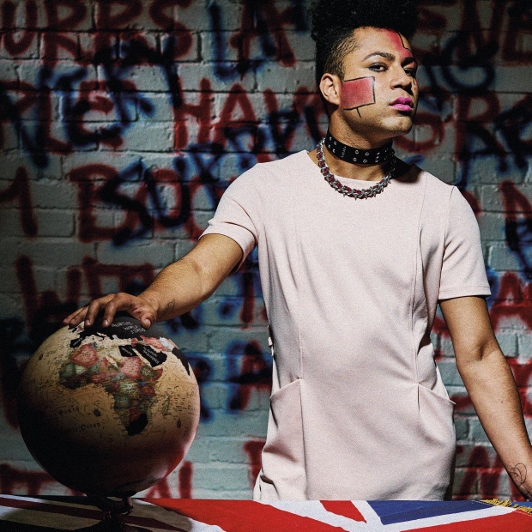 A free-spirited, gloriously rude, take-no-prisoners blast of a show with a soundtrack to die for. Marking the 40th anniversary of Derek Jarman’s iconic film, the Royal Exchange’s world premiere of Chris Goode’s stage adaptation of JUBILEE is sure to appeal to young punks, old punks, and anyone who’s ever wanted to set the world on fire.

A marauding girl gang are on a killing spree and a time-travelling Queen Elizabeth I, played by original film cast member and legendary punk warrior Toyah Willcox, observes it all. An electrifying ensemble cast, including Lucy Ellinson as Ariel and Travis Alabanza as Amyl reimagine JUBILEE for a 2017 audience. A co-production with Chris Goode & Company this riot of a show will run from 2 – 18 November.

Chris Goode is a writer, director, performer and musician. Since 2011 Chris has been lead artist of Chris Goode & Company, with whom his work has included two (of his four) Fringe First award-winning shows:Outside of CG&Co he has made work for and with National Theatre of Scotland, Theatre Uncut, the Royal Court, Headlong, Tate Modern, Royal Opera House Covent Garden and Sydney International Festival among many others. Chris currently directs the all-male performance ensemble Ponyboy Curtis.

Toyah Willcox has avoided categorisation for 41 years. She is an award-winning singer/ songwriter/ actress with multiple silver/gold/platinum albums under her belt. Toyah’s career started at the National Theatre when she was 18, where she formed her first band named TOYAH and took the punk scene by storm, even managing to avoid categorisation within the movement, and successfully pushed out the boundaries for women in music.

She met Derek Jarman in 1977 and they became loyal friends. In the original film JUBILEE Toyah played Mad the Pyromaniac, a role she created with Jarman’s blessing. Toyah continues to sing to sell out audiences and has a passion for British Film, acting in recent films such as AAAAAAAAH!, EXTREMIS, HOUND, SWIPERIGHT, and TO BE SOMEONE.

Adapted for the stage by Chris Goode

From the original screenplay by Derek Jarman and James Whaley