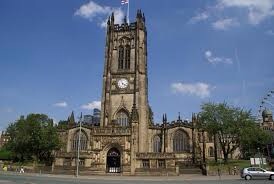 Manchester Cathedral is to receive £225,000 from the government as part of a countrywide scheme to carry out important repairs works.

Programme 41 sees thirty one cathedrals across England receive over £8million for urgent repairs which will see them able to fix leaking roofs, repair stained glass windows and spires, and carry out many other important works.

The fund was announced in Budget 2014, and set up in April this year in recognition of the powerful symbol our cathedrals are of Britain’s shared history, as well as the significant role they will play throughout the commemorations of the centenary of the First World War.

‘Our places of worship are also playing a huge part in all our plans to commemorate the centenary of the First World War, and this Fund is helping to ensure they can fulfil this role to remember those who gave so much for us so many years ago.’

The grant will now enable urgent works to be undertaken to repair the lead roof where inspections have shown it to be failing and for repair work to be carried out on the asphalt roof over the Chapter House, which has been a problem for some time.

The works form part of an on-going ten year programme of progressive, internal and external improvements that the Dean and Chapter have embarked upon under the Manchester Cathedral Development Project.

In 2013, the nave, aisles and chapel floors were re-laid renewing and improving failed under-floor heating. In 2016, a new organ will be placed on the rood screen and preparatory work for this will be underway in the first half of 2015, when at the same time it is envisaged that a new east window will be installed.

The Dean of Manchester, the Very Reverend Rogers Govender, said “This is excellent news and we are delighted to now be able to progress with much needed urgent roof repairs, which will ensure that Manchester Cathedral is preserved for future generations. This will allow us to continue in our mission across the city and beyond.”

Manchester is not alone in the North West in receiving funding.Blackburn, Liverpool Anglican, Lancaster Chester will all be getting funding over the next few months.

Go ahead for Graphene’s Innovation Centre