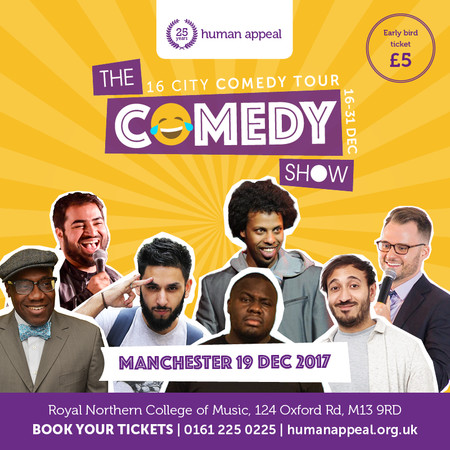 Human Appeal, a British humanitarian aid NGO, are holding a comedy show in Manchester as part of their campaign to raise £1.1 million to fundraise for people around the world and in the UK who are vulnerable to winterisation, such as homeless people, refugees and internally displaced people – whose likelihood of dying increases dramatically during the winter months.

The gig is part of Human Appeal’s 16 city comedy tour this December, organised in order to make people laugh whilst raising awareness of the greater risk winter brings to people living in dangerous circumstances through their #WinterKills campaign.

“For millions of people around the world, winter can be a killer. Sub-zero temperatures, freezing rain, sleet and snow are deadly when you don’t have a home to go to, warm clothes to wear or shoes on your feet. The danger of conflict has forced millions to flee their homes in Syria, Iraq, Yemen and Myanmar but they are about to face another danger they can’t accept – winter. And on the streets of the UK, so many people don’t have a roof over their heads and sleep on the freezing streets, wrapped in thin sleeping bags or cardboard boxes.

“At Human Appeal, we believe that every life is precious. That’s why we’re launching our #WinterKills campaign, so that we can work together to stop winter taking innocent lives. We aim to help millions of people to survive winter by distributing vital necessities like nutritious food, blankets, mattresses, fuel and warm clothing.

We have some very good comedians who are not only committed to making people laugh but are passionate advocates for helping people in this country and around the globe who are most in need during the unforgiving winter months.“

The event will be at 18:00 on Tuesday 19thth December at Royal Northern College of Music, 124 Oxford Road, Manchester, M13 9RD. Tickets are £5 and available at https://humanappeal.org.uk/events/comedy-show-2017/ . The comedians performing are Preacher Moss, Jeremy McLellan, Ali Official, Bilal Zafar, Prince Abdi and Aatif Nawaz.

Folk NationsSongs of the People at RNCM

Bread and Roses at Oldham Coliseum