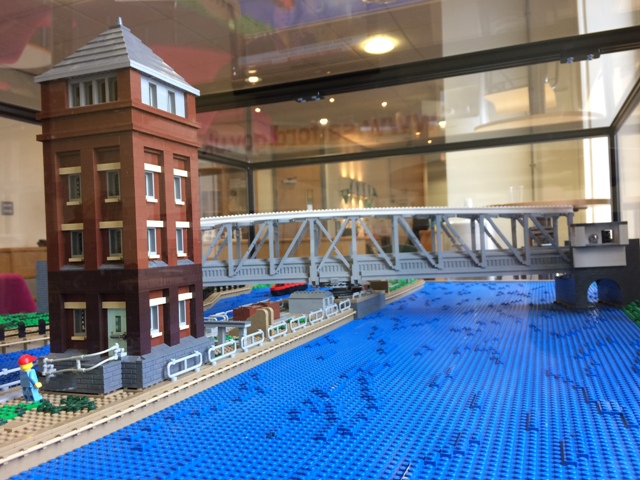 James Brindley carved the original in cheese, the Victorians built it in iron and now the Bridgewater Swing Aqueduct has been recreated in Lego.

The 1.8 metre long model – made of thousands of individual bricks – shows the remains of the original stonework dating from 1761, the aqueduct across the Manchester Ship Canal which replaced it in the 1890s and the central tower which controls the opening and closing of the aqueduct and the adjacent road bridge.

And, just like the real aqueduct which carries 800 tonnes of water, the smaller version can swing open should any Lego sized ships wish to pass underneath.

It’s all part of a programme of activities by Est.1761 designed to boost visitor numbers to the canal and remind people of its incredible history. The Salford section is currently undergoing a five year, £5.6 million refurbishment funded by the Heritage Lottery Fund and Salford City Council. So far, towpaths have been improved and new signage has been installed. New seating and information hubs will also start to appear along the canal in the coming weeks.

Councillor David Lancaster, lead member for environment and community safety, said: “The Bridgewater Canal is one of Britain’s greatest engineering achievements.  James Brindley designed it in 1761, at a time when roads were almost impassable, to drain the Duke of Bridgewater’s mines and create a super-highway to carry coal to the growing industrial centres of Manchester and Salford.

“Part of the challenge was to take the canal over the River Irwell – and to explain how he proposed to do that, he carved a model from a block of cheese which he took to Parliament”.

“When the river was widened into the Manchester Ship Canal in 1894, Brindley’s stone built structure was in the way and had to be replaced. That led to another amazing engineering feat – the world’s first and only swing aqueduct.”

Controlled from an island in the centre of the canal, the real aqueduct is an iron trough which can be closed by gates at each end. The whole thing, carrying 800 tonnes of water then turns through 90 degrees allowing ships to pass along the Manchester Ship Canal.  And it still turns smoothly and quietly – just as it has done for over 120 years.

The  model also shows Barton Aqueduct Pocket Park, nestled by the 1761 stone structure on the Salford side of the Ship Canal, which has been renovated to give better views of the aqueduct. Lighting shows up the original stone masons’  marks and a walkway leads down to a viewing point beside the Ship Canal.

The Lego model, built by professional LEGO builders at Bright Bricks, is currently on display in reception at Salford Civic Centre until the end of the year. It will then go on display at various buildings across the city as well as being used to inspire a new generation of engineering geniuses as part of workshops with local schools for Science Week 2018.

North West business sentiment is the lowest in the UK despite an increase in...

200 made redundant as Manchester Construction Company Bardsley goes under