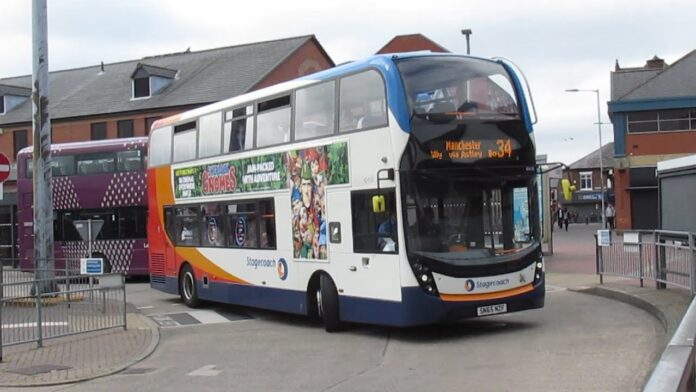 A seventeen year old boy from Leigh has been sentenced for crimes including assaults against bus drivers and Transport for Greater Manchester employees.

boy, who cannot be named for legal reasons, was today sentenced at Wigan and Leigh Magistrates Court to two years detention at a young offender institution and a two year Criminal Behaviour Order, after pleading guilty to two counts of assault by beating, Possession of a bladed article Possession of an imitation firearm with intent to cause fear or violence, Intentional harassment, alarm or distress and Actual Bodily Harm.

On Friday 10 July 2020, the teenager was loitering around Leigh bus station amongst a group when he began verbally abusing a member of staff. The 17-year-old then tried to offer a passer-by money to punch the staff member before threatening him with violence.

Three days later, the 17-year-old was approached by officers at the bus station who were dressed in civilian clothing and working as part of an operation focusing on public transport safety. Upon officers showing him their identification, he started to walk away and began to run as officers asked him to stop, discarding something as he ran. The discarded item was recovered by officers and found to be a large hunting knife.

Two months later on Monday 3 August, the 17-year-old lashed out at a bus driver and hit him in the face after he was refused travel. This was following a torrent of verbal abuse because the driver wouldn’t let him board the bus with an invalid pass.

Ten days later, the 17-year-old assaulted another bus driver, punching him in the ribs before whipping him around the throat multiple times with a phone charger after being refused entry on board the bus for not having a valid ticket.

The next day, after a bus driver told the 17-year-old he was not allowed to board the bus without paying his fare, the 17-year-old threatened the driver, before paying for his ticket and taking a seat at the back. As he was exiting the bus, the 17-year-old verbally abused the bus driver before pulling an imitation firearm out from his coat pocket and aiming it at the driver’s arm. Although the injury was minor, the driver was left incredibly shaken by the incident.

Sergeant Nick Bamber, of GMP’s Transport Unit, said: “This teenager has caused constant problems within the community and his threatening, abusive behaviour is completely unacceptable.

“Let today’s result be a message for anyone who thinks they can act in such a manner and intimidate innocent members of the public who are just trying to do their jobs – your behaviour will not be tolerated and we will ensure that you face consequences for your actions.

“This 17-year-old was old enough to understand the impact of his behaviour and I hope that this sentence will give him the time he needs to reflect on the hurt and fear he has caused.”

31 year old man arrested on suspicion of murder after man dies in Bolton...