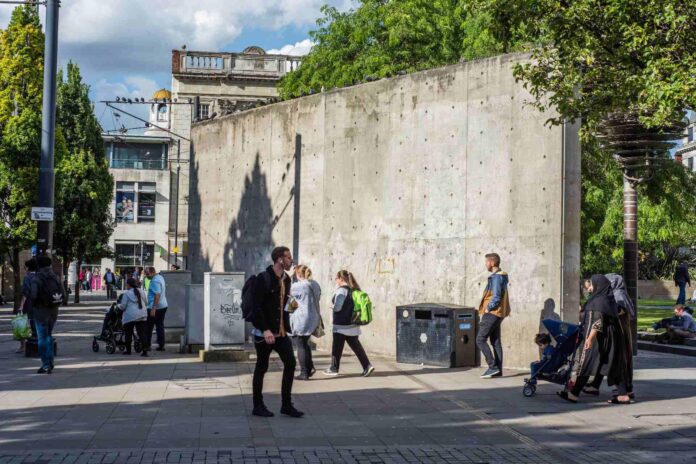 Work to knock down the free-standing part of the Piccadilly Gardens wall will begin this month, it has been confirmed.

The demolition, which will begin on 16 November 2020, is the first step in wider plans to transform the area.

These early works are designed to make it easier to see across and move through Piccadilly Gardens, with poor sightlines cited as a contributory factor in antisocial behaviour.

Ideas for the wider improvement scheme are being developed and will be shared with the public and businesses to gauge their views towards the end of the year. This feedback will then help shape the final design brief.

The overall regeneration scheme will cover an area including a section of Piccadilly to the north of Piccadilly Gardens, Parker Street to the south and Mosley Street to the west. The scheme also intends to address improvements to the Pavilion building, which includes the other part of the wall. What form these improvements take is to be determined.

“As the city begins its recovery from the impacts of the coronavirus pandemic and looks to the future, the regeneration of this prominent space will have a big part to play – hosting appropriate events and encouraging and supporting nearby business activity and job creation.

“Improving Piccadilly Gardens and the surrounding area is a high priority for the council. Further ideas are in the pipeline but this demolition will be the first visible sign that change is coming.”

Councillor Pat Karney, city centre spokesperson, said: “This is the news that everybody in Manchester has been waiting for – part of the wall is coming down. I’m going to mark it on my calendar.

“This is only the first part of what will be much bigger plans to make Piccadilly Gardens the vibrant and inviting space at the heart of the city which it should be.”

Low income families in Greater Manchester paying more than £1000 over the odds report...