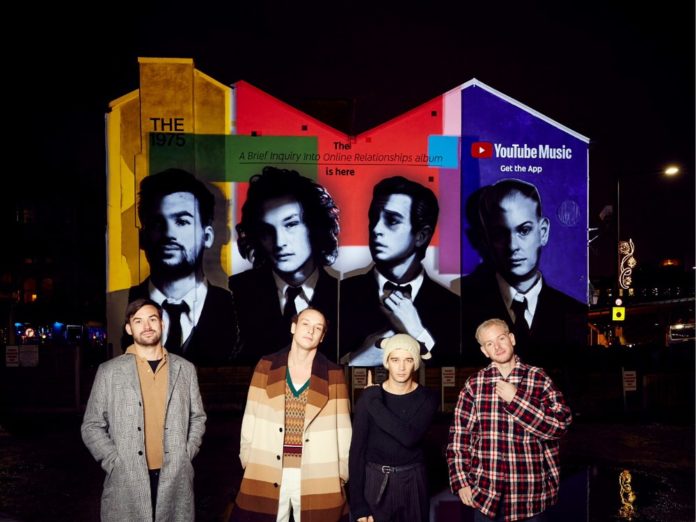 Created to mark the release of The 1975’s third studio album – ‘A Brief Inquiry Into Online Relationships’ – the unveiling of the mural was attended by all four band members, and was mapped with a projection incorporating several of the band’s videos, onto the side wall of historic Manchester pub, the Hare and Hounds.

The mural is the first ever projection-mapped mural to be unveiled in the city, with striking artwork that combines the iconic visuals for The 1975’s three album launches to date.

The band’s latest album, which is now available for fans on YouTube Music, is the latest offer from the Manchester four-piece, following 2016’s ‘I Like It When You Sleep, for You Are So Beautiful yet So Unaware of It’. The band has over 1.8 million subscribers on their YouTube channel.

Matty Healy, frontman of The 1975, commented: “Manchester is a really special place. It’s where it all started for us as a band so it’s brilliant to be able come home and launch our new album here. Big thanks to YouTube Music for all the support.”

Azi Eftekhari, Head of Music Partnerships at YouTube, UK commented: “There’s no other band in the world like The 1975. They are making music that people will be listening to for decades to come. Their aesthetic and eye for detail in their visual work is truly remarkable – witty, profound and always iconic. YouTube has been a natural home for them, and it has been a pleasure for YouTube Music to play a part in this era-defining album campaign.”

Will the true price of convenience stop Britons from damaging the Blue Planet?