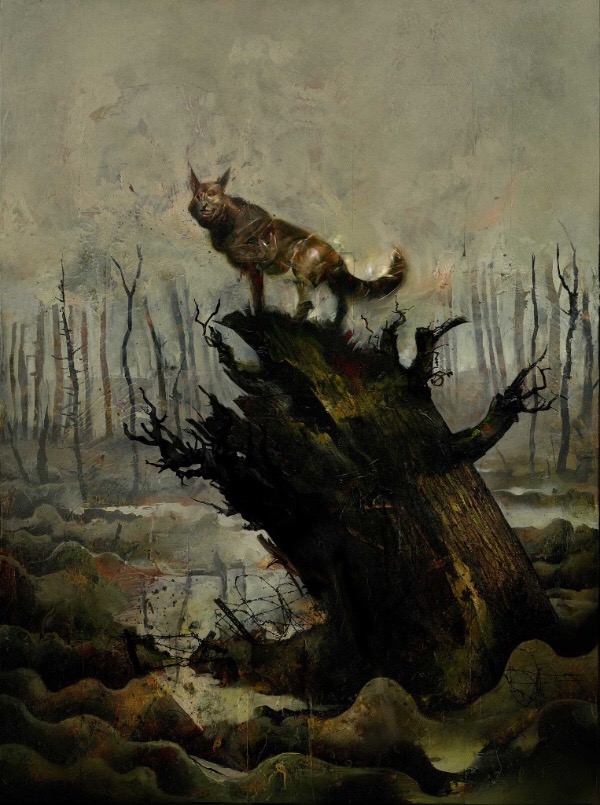 Cumbria will host a world-premiere performance and the launch of a unique graphic novel as part of 14-18 NOW, the UK’s official arts programme for the First World War centenary.
Initiated by The Lakes International Comic Art Festival, Black Dog – The Dreams of Paul Nash, exploring the work of one of Britain’s first modernist paintings and his role as an official war artist, is a new graphic novel and multimedia performance by illustrator, comic artist, filmmaker and musician Dave McKean. McKean explores the work of Paul Nash, one of the most important British artists of the twentieth century, whose First World War experiences inspired him to create paintings of disturbing, lasting power.

The world-premiere performance by Dave McKean and international musical collaborators will take place at Kendal Town Hall on 28th May, 2016. The performance will feature projections, animated illustrations, live music and narration.

Additional performances will be held in France over the summer before the performance returns to Cumbria for the graphic novel launch in October.
Black Dog – The Dreams of Paul Nash by Dave McKean is co-commissioned by The Lakes International Comic Art Festival, On a Marche sur la Bulle and 14-18 NOW WW1 Centenary Art Commissions, supported by the National Lottery through Arts Council England and the Heritage Lottery Fund. The commission is also supported by Kendal College, Kendal Business Improvement District and South Lakeland District Council.
The graphic novel will be released in two editions – a limited edition in May and a full publication in October at the Lakes International Comic Art Festival (14-16 October 2016).

The 14-18 NOW programme has invited artists from around the world to create new works in response to the First World War and its impact on the world we live in today.
“We are thrilled to be bringing such a unique artistic commission to Cumbria,” says Julie Tait, Director, Lakes International Comic Art Festival. “This is the only comic art commission to feature in the national centenary programme and an amazing opportunity for comic art to reach new audiences.

“Dave McKean combines many artistic media to create work that challenges, inspires and excites. This is a major new work by one of the most creative minds in the comic world; inspired by one of the most important artists of the twentieth century.”

“We are thrilled to be partnering with the Lakes International Comic Art Festival to present this unique performance and new graphic novels by the hugely talented Dave McKean,” added Jenny Waldman, Director, 14-18 NOW.

“14-18 NOW aims to encourage people to pause and reflect on the impact of the First World War through art, and it is wonderful that we are able to give visitors to, and residents of, the Lake District the chance to do this.”

“I’d like to explore Paul Nash’s role in the birth of modernism and surrealism,” says Dave McKean, says of the project, “and how those movements were actually witnessed by Nash in the dream-nightmare-like battlefields of the war. He used the landscape that he loved to try to deal with what he’d been through, and to try and find calm and solace beyond.”

Dave McKean’s work has won numerous awards including the World Fantasy Award, the V&A Museum Illustrated Book Award and the Harvey Award for best Graphic Novel. He has worked alongside writer Neil Gaiman on graphic novels including the critically acclaimed The Sandman series, as well as illustrating the celebrated Batman graphic novel Arkham Asylum. Dave has illustrated numerous magazines, album covers as well as illustrating short stories and children’s books. He has collaborated with creatives and writers from all walks of life including biologist Richard Dawkins, chef Heston Blumenthal and musician John Cale. Six of McKean’s images appeared in the Royal Mail’s Mythical Creatures Collection.

14-18 NOW is a programme of extraordinary arts experiences connect people with the First World War, as part of the UK’s official centenary commemorations. It aims to engage as many people as possible with the First World War, exploring how the war has impacted on the society we live in now. 14-18 NOW commissions new work by leading contemporary artists from all art forms, inspired by the period 1914-1918.
The commemorative period is marked by three key seasons – the first season centred around 4 August 2014 (Anniversary of the Declaration of War), the second is March to November 2016 (anniversary of the Battle of Somme) and the last in 2018 (centenary of Armistice Day). 14-18 NOW is responsible for the UK tour of the iconic poppy sculptures by artist Paul Cummins and designer Tom Piper. 14-18 NOW is supported by the National Lottery through the Heritage Lottery Fund and Arts Council England, by the Department for Culture, Media and Sport and by additional fundraising. 14-18 NOW has commissioned over 80 artworks to date that have been seen by over 20 million people.